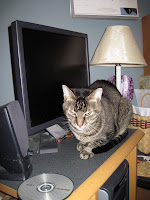 Normally I don't mind talking about myself, but I keep the personal things under wraps. Today is not one of those days. Now I'm writing this on Wednesday and most of you will probably not read it until Thursday. But today, Wednesday, is a cruddy day.

You might have noticed in my previous posts that I am a cat person. Have been all my life. Why? Because I like to have a kitty snuggled in my lap and purring. Dogs are great and all, but my dogs are too big to stick in your lap (they sorta drape over and loll there).

We had to put my cat down today.

If you recall, I do have two cats.

Kenny, the fat orange one, is still fat and orange and currently chasing a lady bug.

For the past few months, he's been on a downhill skid. This time a year ago, he still played fetch (yes, you'd throw the piece of dog food and he would bring it back to be thrown again). A year ago, he'd run through the house and sing (well, meow at all hours of the night for whoever happened to listen). He'd terrorize the dogs, antagonize Kenny, and beg for moist kitty food at 5 AM.

In October, he stopped eating his wet kitty food and dropped from 8 lbs to 6 lbs. After daily visits to the vet and no progress, I took him off his meds, which only made him puke, and put him on natural kitty food that I made (Thanks, M). That seemed to help cause he wasn't puking and seemed to be getting his steam back.

Right after Christmas, he got worse. He wasn't eating and pooping became a chore. To keep him from using my loveseat as a litter box, we started putting him in the dog crate (it's big enough for a Doberman). He hated it, but I think he also saw it as a little refuge from the dogs, Kenny, and my DS. He'd eat his food and seemed reasonably happy.

Last night, he seemed a bit listless, but I thought, he hasn't been eating, so it'll pass. When I woke up, he was still kinda juts laying there. So I fluffed a blanket next to me on the couch and plopped him there to watch him. Normally cats will shift and get comfortable. Not Rusty. He laid there in the position I put him in for 45 minutes. Not good. I rubbed his head and talked to him. I felt like crap for not doing anything, but I wasn't sure what to do.

When DH woke up, I told him Rusty wasn't really moving. We then took Rust to the vet. Around 12:10 we put him to rest.

Now I realize he was hurting. There was a growth in his belly. I don't know what it was and the vet wasn't sure either. Cancer? Might have been. Dunno. But there are things you'll never forget for the rest of your life. Carrying his poor little body is one of those things.

My regular happy posts will resume tomorrow. Right now I thought I should share my story. It makes me feel a bit better to talk about it, but yep, I'm still upset.

And yep, I'm still a cat person.
Posted by Wendi Zwaduk and Megan Slayer at 9:30 PM

I'm so sorry. I understand, been there. Hugs kiddo.

I'm sorry as well. This kind of this is never easy. Our 11 year old basset hound isn't doing well either, so I do understand.

Hey Wendy, so sorry to hear your story. It was eerie reading it because the exact same thing happened to me over the holidays. We've had 2 cats for 10 years and they were the best of friends. One morning one of them didn't come for her morning food. When we found her she was just laying in the middle of the floor in a back room. She looked to be in an awkward position, like she hadn't made herself comfortable. We moved her and she just plopped down. Cats just don't do that. She seemed listless and stiff all at once and you just know something major is wrong. Hubby took her to the vet, but she never came home. An x-ray revealed she had a massive tumor throughout her internal organs. We never had a clue and there was nothing they could do. It progressed quickly and I'm sure she wasn't in any pain prior to that day. Our other cat is still trying to adjust however. You enjoy your pets and you love them, but you get so used to them just being there. There's definitely a void when they're gone.

Linda - thanks. Will you be at the GT in June? I hope so then I can get the hug in person.

Jaime - sorry to hear about your dog (bassetts are my fave). Its no fun when they hurt and can't tell you. Hugs to you too.

Kaily - Wow, that stinks. The vet didn't bother to try to look at the tumor, he just gave us a rough idea, but since Rust was down to 5 lbs, there wasn't much we could do. But this isn't the first cat I lost. We had one about 6 yrs ago that had bad kidneys. We knew he did and we fed him special food and spent a lot of time at the vet because he'd get backed up or kidney stones. When he went, it was quick. He hid behind the sofa and when I went to hunt him down, he didn't cry or whine. I called the vet (a different one cause we weren't living where we are now) and the answering service never got the msg to him. My mom took him in the next AM cause I had to work. He died enroute to the vet's. Now, I was at work and no one bothered to tell me what happened. I just rushed to the vet's after I got off and there on the chart was the news - DOA. Yeah, I broke down. Still hurts, honestly. There is definitely a void. Yup.

I'm sorry to hear about your kitties and thanks for the hugs.

Wendi, I'm so sorry for your loss. I've been there many times now, and it never (ever) gets any easier. We had our Rottie put down this fall because of cancer, too -- our rule is that when the bad days outweigh the good, then it's time. You did the right thing - and you're wise to share (I did the same thing when Maya died).

Many, many hugs,
Linda Poitevin

I wish I could have helped more ... poor Rusty, poor you.

I'm so sorry, Wendi. As a cat person myself, I've been through this many times too and it's never any easier. Your story will make me hug my cat a bit tighter tonight.

My husband took our cat into the vet and stayed with her. I honestly don't know if I could have done it. He told me as he was leaving a man and his son (who looked about 10) were also coming out. Both were in tears, hugging each other. They'd had to put down the boy's dog. So heartbreaking. I think we can honor our pets by thinking about the happy and fun times. And think about it. We were such good owners. Our pets had wonderful lives, right?