I thought I'd share a piece of her flash fiction, yes, Mistress.

Raven stood in the throng of Goth dancers and licked her lips. The crowd swayed around her, caught up in the lullaby of the heavy music. She smiled. In spectacular performance mode, her guys rocked the house. Oh sure, she liked their music, but she held something more precious.

“I could fuck him all the way to Texas,” a slip of a teen next to her shouted above the music.

“I have.” All of them. Dear Goddess, the members of Vicious Circle could do more for one woman than her wildest dreams. And all she had to do was nod.

The girl crooked her brow and snapped, “Whatever.”

Before the last song ended, Raven edged through the sweaty swarm. The music surged in her soul, but it wasn’t enough. She needed them. Once she strode into the dressing room, she shed the silky black tunic. When they showed up, clothing wasn’t important.

The sound of their voices echoed in the hallway. Her nipples pebbled and her mouth watered. After she removed the carved bamboo sticks from her hair, the soft tresses skimmed her shoulders.

Behind her, the door opened. She peeked over her shoulder, more to tease them, than to see them.

Gerard, Aidan, Stephen, and Collin might command attention on the stage, but in the back room, bus, bedroom... she ruled.

Raven snapped her fingers. “I know you want to touch me. Close the door.”

When she turned, the metal door clicked. All four men dropped to their knees. Gerard, to her left, groaned. She tipped his chin with her index finger. “What my love? Speak.”

Without tearing his gaze from hers, he replied. “You wore the boots, Mistress.”

While the other three remained on their knees, Gerard stood yet said nothing.

“You played well tonight.” As she spoke, she smoothed her hands over his torso. The muscles tightened under her touch. “You deserve a reward.” When her attention slipped to his cock, an involuntary groan ripped from his throat. “You want my touch?”

“I shall take you, but you cannot come until commanded.”

A rivulet of sweat trickled from his temple. “Yes, Mistress.”

“I want you all to stand.” She snapped her fingers. “Gerard, drop your leathers.”

With the flick of his wrist, he shoved his pants down past his sculpted calves. His cock, long and thick pointed to her like a beacon. Still, his gaze never left hers.

“Unzip me.” As Gerard brought the pull down between her breasts, he revealed her body inch by inch. The cool air caressed her fevered skin. She held open her arms. “Stephen, Aidan, touch me.”

Two sets of hands roamed her naked flesh. Gerard’s lips parted a fraction of an inch. Ah, her voyeur. She’d reward him soon. She dropped her hands and ran a long finger over her silken cleft. Nice and slick.

“Collin, have a taste. I won’t neglect you.”

The blue-eyed vampire strode forward and took her middle finger into his mouth. Gerard groaned. The tip of his cock glistened.

“Gerard, sit down on the couch.” Raven pointed to the leather sofa and turned her attention to Stephen, Aidan, and Collin. “I’m going to fuck him. I want you to touch me so we can come together.”

As the three men guided her to the couch, Gerard lay across the buttery soft cushions. Raven stroked his engorged member, drawing a low rumble from his chest. She sank down on his cock, eliciting her own groan. “Now, we play.” 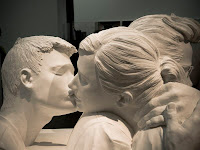 If you like this post, be sure to say something and she might be willing to stop back. And if you want more... well, you know the drill.
Posted by Wendi Zwaduk and Megan Slayer at 9:51 AM

Megan! :::waves::: Sorry I didn't make it over here yesterday, hon. As usual, loved this. But then... I've already seen it. :-D Of course I want to see more, I always want to see more! Your men are so lovely... they give mine a run for their money.

Wendi, thanks for hosting our darling Megan over here. I know she appreciates it. :-D

Hi Kealie! We so need to go out on the town. I'm sure we can stir up trouble.

Thanks Wendi, BTW, for letting me drop by. You know I love writing the short, HOT stuff. In fact, I've had some...er...inspiration... I think the next part might come sooner than later.

Wendi, I love you, hon, so I shall be back and Kealie, I'll call you.

Thanks ladies! I love having Megan here and I love her work.

Kealie, it's always a blast when you stop by.