It's a blog tour and you're invited to my stop. The book I'm featuring is A Convenient Risk by Sara R Turnquist. There are prizes to be won. Like? One randomly chosen winner via rafflecopter will win a $50 Amazon/BN.com gift card. Want more chances to win? Then follow the tour. You can do that here: http://goddessfishpromotions.blogspot.com/2017/05/virtual-book-tour-convenient-risk-by.html 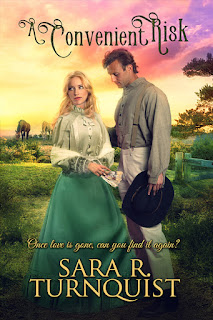 He never imagined her heart would be so hard to reach.

Forced into a marriage of convenience after her husband dies, Amanda Haynes is determined she will never love again. Not that it bothers Brandon Miller. He needs her husband’s cattle. She needs financial stability and long-term support for her son and herself. But she never expected to care so much about the running of the ranch. Or the rancher.

Butting heads over the decisions of the ranch, adding to her frustration and grief at her loss. Her wellbeing is soon threatened as their lives become entangled with Billy the Kid and his gang. What has she gotten herself into? What kind of man has she married? Is there any way out?

“Are you unwell?” Brandon moved toward her.

She stepped back, bumping into the counter. “No. I am well enough.” Amanda pulled her hands around her back.

Was she frightened of him? He halted his progress, and she seemed to breathe easier.

He opened his mouth, but the right words wouldn’t come. Floundering for a moment, he closed his lips and swallowed past a lump in his throat.

Couldn’t he just reach out and take her in his arms? Wouldn’t that make everything better? But that was not the answer.

She bit at her lip, but held his eyes. “I…was just looking for something to eat.”

Brandon nodded. She had missed dinner. “Are you better?”

Nodding, her face turned in the direction of the floor. Her hair fell in waves to both sides of her face. Did she not usually gather it in a braid for bed? His face warmed at the realization that he knew something so intimate about her. At length, he spoke into the silence, “I was worried.”

She met his gaze again. Was that moisture in her eyes? Had he made her upset?

Brandon took a step forward. “Please.” He held out his hands. “I know we haven’t always had the best of understanding between us. But I wish…” Pausing, he looked off to the side. Then secured her eyes again. “Tell me what’s wrong?”

Amanda appeared as if she were ready to climb on top of the counter to escape him somehow, but after some moments, her shoulders relaxed. And then a tear fell.

He held his breath, praying she would speak.

Sara is originally from Middle Tennessee. After a short stint in Memphis, where she earned a degree in Biology and began a career as both a Zoo Educator and a Sleep Technician, she then followed a dream to work for a large zoo in Orlando, FL as an Educator. Once she and her husband started their family, they moved back to Middle Tennessee where they currently reside. Sara and her husband now enjoy a full life with their three beautiful and very active children. She enjoys many creative outlets – singing, piano, drawing, drama, and organizing anything. And even though she has enjoyed her career as a Zoo Educator, Sara's great love of the written word continued to draw her to write. She has always been an avid reader and, for many years, has been what she terms a “closet writer”. Her travels and love of history have served to inspire her to write clean Historical Romance. Sara has made several trips to the Czech Republic. Her time among the Czech people and the landscapes of the country inspired her and greatly influenced her work on her debut novel, The Lady Bornekova, set in Hradec Kralove, Czech Republic. Sara is also the author of The General’s Wife, Off to War, Hope in Cripple Creek, and A Convenient Risk and a member of ACFW.

It's a lovely excerpt!

This sounds like an interesting book - thanks for sharing :)

Who is your favorite author? Thanks for the giveaway. I hope that I win. Bernie W BWallace1980(at)hotmail(d0t)com

Thanks, all, for visiting and for your comments! Joseph, it would have to be Tamara Leigh and Melanie Dickerson. They write in my genre and write so well. They both do a wonderful job of transporting the reader in time and place through their words.