Jennifer Soosar will be awarding a $10 Amazon or Barnes and Noble GC to a randomly drawn winner via rafflecopter during the tour. Want more chances to win? Then follow the tour here: http://goddessfishpromotions.blogspot.com/2017/06/blurb-blitz-tour-parent-teacher.html 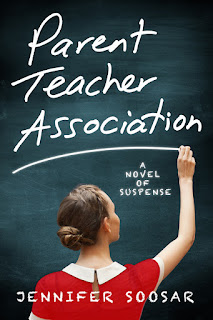 Fresh out of a mental hospital, Lizanne Demeter is thrilled to get a second chance at her career when she's hired to teach third grade in the backwater town of Splinter Wood, Pennsylvania. But hopes for a peaceful new life are ruined when demanding ‘helicopter mom’ Naomi Seabrook pushes Lizanne to the brink.

While struggling to maintain control of her classroom, Lizanne begins to unravel the secret behind Naomi’s hell-bent agenda. As deadly clues emerge, Lizanne suspects Naomi is guilty of more than just overindulging her child.

With her life teetering on chaos, Lizanne risks everything to expose the shocking truth. But first, she must race against her own spiraling sanity to prove herself a more dedicated teacher than anyone dared imagine—the kind of teacher who makes ALL the difference.

“See, here’s the problem with single female teachers,” Naomi said. “You got no life. You put an inappropriate amount of attention on insignificant things and work them up into a froth. There’s no perspective in your sad, one-dimensional world.”

“I don’t like you snooping around in areas that are none of your business,” Naomi said, eyeballs bulging. “Ruth made an error hiring you. You’re too weird, if that’s even possible. And know what else? You’re a lousy teacher! Sebastian is miserable in your class. I tried communicating that with you, but you’re clueless!”

The words stung—you’re a lousy teacher—and Lizanne labored to sweep it away.

“You’re easily the worst teacher in Battle Hill history and I’m including my own years spent there as a student.”

Sebastian appeared in the doorway.

“This so-called teacher of yours is useless,” Naomi said to him. “I’m amazed she dares to call herself a teacher at all.”

When he snickered, Lizanne felt crippled.

“Look how you allowed that poor child to climb that tree and fall to his death,” Naomi said, advancing with the box cutter. “That was all your fault, wasn’t it?”

Naomi followed. “Go ahead, keep thinking it was an accident, if that makes your stark life more bearable. But we both know it wasn’t…”

Sensing a grim truth had just been spoken, Lizanne found a sudden poise. She turned to face Naomi. “No, it wasn’t an accident, was it?” she said. “It couldn’t have been.”

Jennifer Soosar watched too much ‘America’s Most Wanted’ growing up and has been writing about shady characters ever since. She was born and raised in Toronto and has a degree in Anthropology from York University. Her short fiction has appeared in the Toronto Star and in Ellery Queen Mystery Magazine. She is a member of the Crime Writers of Canada, the International Thriller Writers and Sisters in Crime.

I'm happy to be stopping at Wendi Zwaduk's blog today on my tour! My book is in the suspense genre but it has a romance in it...an unconventional romance. Lizanne, my teacher protagonist, begins a relationship with a convicted man she met on a prison pen pal website.

Who is your favorite author currently writing? Thanks for the givaway. I hope that I win. Bernie W BWallace1980(at)hotmail(d0t)com

Thanks for sharing - have a great weekend! :)

What author inspires you the most? Thanks for the giveaway. I hope that I win. Bernie W BWallace1980(at)hotmail(dot)com

What is your favorite book cover of all time? Thanks for the giveaway. I hope that I win. Bernie W BWallace1980(at)hotmail(d0t)com