It's a blurb blitz for the Lost Sisters Trilogy by Dilys J Carnie. You'll want to stick around. Why? There are prizes!! Like?
Dilys J Carnie will be awarding a $20 Amazon or Barnes and Noble GC to a randomly drawn winner via rafflecopter during the tour. Want more chances to win? Then follow the tour. You can do that right here: http://goddessfishpromotions.blogspot.com/2017/06/blurb-blitz-lost-sisters-trilogy-by.html 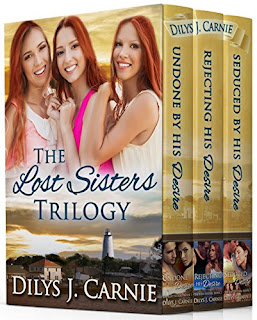 Undone By His Desire

Micah King arrives in North Carolina with one goal—to verify that Daisy Wallace is one of the women his security firm has been hired to locate. He wants to tell her the truth about why he's there, but first he needs to make sure that she is indeed who he's looking for. He never meant to get involved with her, but she's just so tempting.

Will Daisy be able to forgive Micah's lie by omission? After all, he's deceived her from the first moment she laid eyes on him, and she's had her fill of deceitful men. And can she forgive the woman who gave her up for adoption thirty years ago?

Rose Eagleton has never let anyone penetrate her tough exterior. She won't allow herself to be hurt again, nor will she let anyone uncover the secrets of her past. When she meets Jack Calloway he refuses to let her hide behind her shell, but she knows one thing for sure—she can't let him become important to her.

Jack is intrigued by the beautiful young woman who fights so hard to keep him at a distance. As he discovers the secrets she's trying so desperately to hide, it becomes clear that her life is in danger. Can he break through her shell and provide her with the protection she needs but refuses to accept?

Seduced By His Desire

Kent Lloyd steps onto British soil wishing he was anywhere else. But when Jasmine Owen refuses to visit her newly found sisters, giving them one lame excuse after another, even Kent knows something is seriously wrong.

The last person Jasmine expects or wants to see at her door is the super sexy man who walked away from her bed after one wild night. But when her sisters suspect something is wrong, they send Kent to check on her. Jasmine hasn't told her family about the stalker who's making her life a living hell and has her in a constant state of fear, but it looks like she might not be able to keep the truth from them any longer.

And now for an excerpt from Seduced By His Desire:

Jasmine been terrified for what seemed like an eternity, but with Kent there she felt safe. The adrenaline that kept her on her toes with fear was suddenly no longer there and the jitters were taking over.

Kent took something from his bag and put it beneath the lock on the door, but before she had a chance to ask him what it was he was asking her more questions.

"How many times do you think he's been in your apartment?"

"Twice, and I changed the lock each time. He always left a vase of tall, white lilies on my nightstand." They seemed to be assuming her stalker was a he, although she wasn't sure if it was a male or female.

"Did you report that?"


"Yes, but I think they thought I was some kind of loon because I had no proof. Somehow he managed to break in without leaving any evidence."

She nodded. "I threw them away instantly. Although I've never had anyone give me flowers before, and I was tempted to keep them." She laughed, but her shot at humor was lost on Kent and he didn't even crack a smile over that gorgeous face.

"So you decided not to come and see your new niece and pass on Thanksgiving."

"I'm not putting my family at risk. Jesus, Kent, I've only just found my sisters. I missed growing up with them for thirty years. I refuse to put any of their lives in danger."

"You do know we run a security business and that we're fairly successful," he said sarcastically. "You'd rather face this stalker on your own and beat him with a lamp?" The disparagement in his voice annoyed the hell out of her.

"It was the only thing I had on hand, but I can take care of myself."

His eyes were thorough as he observed her. "You're very independent, Jas, but you have to let me help you."

She'd always been that way. Her parents had taught her to take care of herself, which she did, had done.

Those few words took her breath away, and she wasn't stupid enough to deny him. This had gone too far for her to deal with on her own.

I live on Anglesey which is a small island in North Wales.My life here is busy as I help with the family business (general dogsbody lol) and try and fulfill my writing contracts.  My office is under the stairs of our small welsh cottage and this is where I let my imagination run riot.


I love to write and be creative with my characters.  At the moment I am in awe of the people who have read my book, It is great to meet people who have taken the time to buy it and read it and I love meeting new fans.

Thank you, Wendi, for hosting me today. I look forward to any questions comments.

I'm looking forward to reading this series, thanks for sharing :)

Thank you for popping in :)

I hope you enjoy reading the trilogy, Victoria :)

Who is your favorite author? Thanks for the giveaway. I hope that I win. BWallace1980(at)hotmail(d0t)com Bernie W

Congrats on the tour and I'm looking forward to reading this series, thanks for sharing!

That's a hard question, Joseph as I have many favourite authors that I like to read. It can be Lori Foster- Charles Dickens and anything in-between very much like my music collection whatever takes my fancy at the time.

Thank you, Carole, I hope you enjoy reading the series.

Thank you, Wendi, for hosting me, it has been a pleasure to be here.