It's a book blast and I'm featuring Moondance by Linda K Hopkins. Stick around. There are prizes to be won. Like? Linda will be awarding a $20 Amazon or B/N GC to a randomly drawn winner via rafflecopter during the tour. How cool is that? Want more chances to win? Then follow the tour. You can do that here: http://goddessfishpromotions.blogspot.com/2017/05/book-blast-moondance-by-linda-k-hopkins.html

Are some obstacles too difficult for love to overcome?

For years, Melissa Hewitt has dreamed of being hunted by a panther, a huge, black creature that 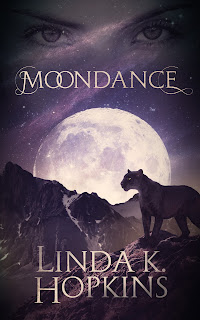 pursues her relentlessly. But panthers do not exist in real life – not in Canada, anyway. And it is in the Canadian Rockies that Melissa escapes the stresses of her work – a job that come with a handsome but unfriendly boss who exudes both danger and allure. There is something about Leander Garrett, however, that draws Melissa, making him almost impossible to ignore; that, and the fact that once they had been friends.

As winter turns into spring, Leander’s chilly demeanor begins to thaw, but danger prowls through the mountains, and Lee has a secret that lurks beneath his elegant clothes and rippling physique. Something that compels him to reject what he desires the most.

Can he learn to see the good in himself and finally allow his heart to love, and be loved in return?

A captivating paranormal romance, Moondance will keep you enthralled to the very last page.

Melissa’s eyes were on the view ahead instead of the trail and she missed seeing the animal standing in her path. A sudden blur was her only warning before she fell into the dirt, her arm securely gripped in the mouth of a large, tan cougar. She screamed, and for the briefest moment, its grip slackened before it dug it’s teeth even deeper into her flesh. With her free hand she hit the creature in the ribs, and it snarled and shook her arm, ripping it even more. She scrabbled her hand over the dusty ground and her fingers curled around the smooth bark of a stick. Heaving it into the air, she swung at the creature, catching it on the ribs. The cat loosened its grip, and she pulled her arm away and scrambled backward before pushing herself hurriedly to her feet. Her skin was ripped and bloody, but she barely noticed as she grabbed the branch again and swung it through the air in the direction of the cougar. It snarled and darted away from the crude weapon, its olive-green eyes watching her intently, and Melissa gripped the branch more tightly.

A crashing sound came from the trees, and then, suddenly, a flash of black rushed through the air, slamming into the cougar and sending it flying. She stumbled back as a huge black cat, bigger by far than the cougar, fought her attacker. Her mouth went dry as she realized it was a panther – just like the one from her dreams. Tan and black blurred together as snarls and growls ripped through the air. Blood spurted over the dirt; the cougar yelped but met the panther with bared teeth. The black cat didn’t even pause as it lunged for the cougar’s throat, ripping open the side of its neck. The cougar stumbled to the ground, then rose and fled.

The panther watched as the cougar disappeared between the trees, then slowly turned its bright green gaze on Melissa. She stared back, frozen with fear, as the creature looked at her. It glanced at her arm, bloody and dirty, and she stepped backward, holding the injured limb to her chest as she gripped the stick. The cat followed her movement, then with a flick of its tail turned and vanished through the trees. 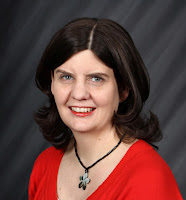 Linda K. Hopkins lives in the shadow of the Rocky Mountains in Calgary, Canada, with her husband, two kids and one dog, but originally hails from South Africa. When she's not dreaming about fantastical creatures, you will find her with her nose buried in a book. Linda also loves to travel - through both physical and imaginary time and space. And if she has a slab of dark chocolate and cup of hot coffee while travelling, so much the better!
Linda holds a bachelor’s degree in communications from the University of South Africa. She is also the author of The Dragon Archive series.

Great to be here - thanks for having me!