It's a blurb blitz and today I'm featuring Ryshia Kennie's book, Sheik Defense. You'll want to keep reading. Why? Ryshia Kennie will be awarding a signed copy of Sheik's Rule to a randomly drawn winner via rafflecopter during the tour. How cool is that? So get commenting. Want more chances to win? Then follow the tour. You can do that here: 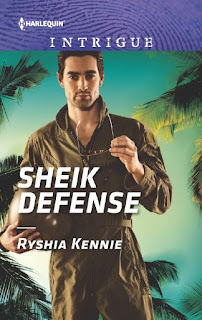 Tossed overboard, Ava Adams had been left for dead, drifting at sea. But security specialist Faisal Al-Nassar was determined to find her. He owed her father a great debt and had never forgotten the connection he and Ava had once shared. Yet after rescuing Ava he discovered she barely remembered him.

Amnesia had left Ava uncertain of who had tried to kill her. She did know, however, that Faisal was a man she could trust. The sheik's embrace was familiar and enticing...and possibly even more dangerous. How could she succumb to feelings for her protector when what she didn't know could get them both killed?

Ben wasn’t sure how it had happened. But he’d gotten lucky and landed in the water.  He’d just missed hitting his head on the way down. He’d seen Dan fall overboard but then he’d fallen over himself.  It didn’t matter, he’d planned to swim to shore anyway.  He’d shot Dan first and he’d gone over a dead man.  The yacht was on autopilot, its navigational system dead, heading somewhere out to sea.  In other circumstances he might have laughed.  It would keep the authorities occupied trying to find the boat.
There was only one threat left and that was the little witch of a daughter Dan had managed to dump in the life raft.  There’d been nothing he could do to stop him.  It had all happened so fast.  He felt a twinge of regret.  Now Dan was gone and the yacht was already too far away to be a consideration.  He’d raised the anchor before the altercation began.

He swam toward shore. He’d locked in his mind in what direction and how far away they had drifted.  Yet the weather system was moving in faster than had been reported.  It was a squall, and that and his aching shoulder had him gulping water and struggling as the weather worsened.  Combine the weather with the fact his clothes weighed him down, and it was rough going.  He reached down, wrestling with the laces of his oxfords, finally managing to get them off and tie them to the belt loop of his pants.  It wasn’t supposed to go like this.  He wished he hadn’t had to kill Dan, but once he’d made the decision, he’d accomplished what he meant to.  He’d shot Dan and he’d fallen overboard.  Now there was only one problem he had to resolve before he became a rich man.  The one fly in the ointment was Dan’s daughter.  She wasn’t supposed to be on the yacht.  Yet, there she’d been like it was her right.  He hadn’t liked her the first and only other time he’d met her.

She’d heard too much and she’d injured him.  Neither offense could be forgiven.  A wave pushed him backward and had him swallowing water.  He choked and flipped onto his back, resting, thinking.  He had to get to shore and then he had to find Ava Adams, and when he did, the little witch had to die.

If you're visiting - hello. Wendi is hosting me and my book Sheik Defense today Sheik Defense, is a story of losing and finding love as much as it is a suspense. Faisal and Ava were made for each other, lost each other and now... I can't tell you the rest, that would spoil the story. But before you go - leave a comment for a chance to win a signed copy of the first in this series, Sheik's Rule.