Out Now ~ Superhero by Megan Slayer 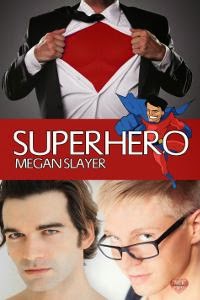 He can levitate objects and predict the future, but no one knows his powers...until he finds a man worth fighting for.

Chase Bender moves objects with his mind and can read the immediate future. If anyone found out the man behind the mask had a lot in common with the regular man character, they wouldn't believe him. What's a man with super hero abilities supposed to do to get a date?

Dylan Foreman isn't interested in jumping into the dating pool, but can't deny the attraction when he meets Chase. Can the burning lust between a simple book keeper and a man in spandex, and sporting a cape really last?

Excerpt, ©Megan Slayer, 2015, All Rights Reserved
Dylan.
He shouldn’t say anything. Should keep on walking.
“Hi there. Do you come here often?” Hell. Of all the things he could’ve said, Chase picked one of the worst pick-up lines…ever.
Dylan’s eyes narrowed. “Do I—we’ve met, haven’t we?”
“I’m sorry. I’m horrible at manners sometimes.” Chase offered his hand. “I’m Chase. We met at the Riley party.” He dropped his voice to a whisper. “I’m Mind Bender.”
“Oh!” Dylan’s eyes widened. “I hadn’t recognized you…but I bet that was the point.” His cheeks burned bright red and the color spread down his neck. “Can I say that was a good show, or will I get you into trouble?”
“Won’t get me into trouble. I appreciate the kind words.” Chase nodded to the cart. “I needed to get a few things. Care to walk with me, or are you nearly done?”
“I’m trying to get my shopping done while Nathan’s at swim camp.” Dylan gripped the cart. “The kid is a fish.”
“He’s your only child?” Chase pulled up beside Dylan and walked the rest of the way down the frozen food aisle.
“Just one. My partner and I couldn’t decide on another one.” Dylan’s blush deepened. “It’s a long story.”
“But I bet it’s a good one.” Chase missed being able to converse with other adults. The people at the store were okay, but they weren’t Dylan. The spark from the party hadn’t been in his imagination. He and Dylan seemed to be able to talk quite well.
“The story has its good parts, but there are bad parts, too.” Dylan stopped. “How much more do you have to buy?”
“Truth be told, I’m done.” Chase grinned. “I didn’t need much.”
“If you’re done, do you want to grab a cup of coffee? The little shop allows carts. I’ve only got a few more things to get.” Dylan flexed his fingers on the cart handle. The indentation of a wedding ring was evident, but not deep. Divorced? Split up? Chase wanted to know and yet, he didn’t want to ask.
“I’d like that,” Chase said. “I’ll pay for my things while you finish, then meet you at the coffee shop in, what, ten minutes?”
“Sounds good.”
Paying for his items didn’t take the entire ten minutes. For once, the lines at the store moved quickly. Chase tucked his change into his wallet. He couldn’t remember the last time he’d gotten through the line in less than fifteen minutes. He pushed the cart to the coffee shop. Most of the tables were empty and one of the booths was free. He pushed the cart behind the booth and plopped onto the wooden seat.


His skin prickled. Being around Dylan heightened his senses. What was it about the dad that kept him on the edge? He eased his phone from his pocket and switched the ringer to silent. If anyone needed him that bad, they could wait. As he sat there, the salt shaker began to levitate. Oh fuck. He grabbed the glass container and held it to the table top. No, no, no. His powers weren't allowed to go haywire. They weren't.
Posted by Wendi Zwaduk and Megan Slayer at 12:00 AM