It's a Virtual Tour and Vegas Miracle is the book in the spotlight! Check it out! Oh, and comment. Why? Liz will award a randomly drawn winner a six-month Kindle Unlimited subscription. So check it out!

Ryan and Grace Sullivan have all the outward indications of a happy life: money, success, an 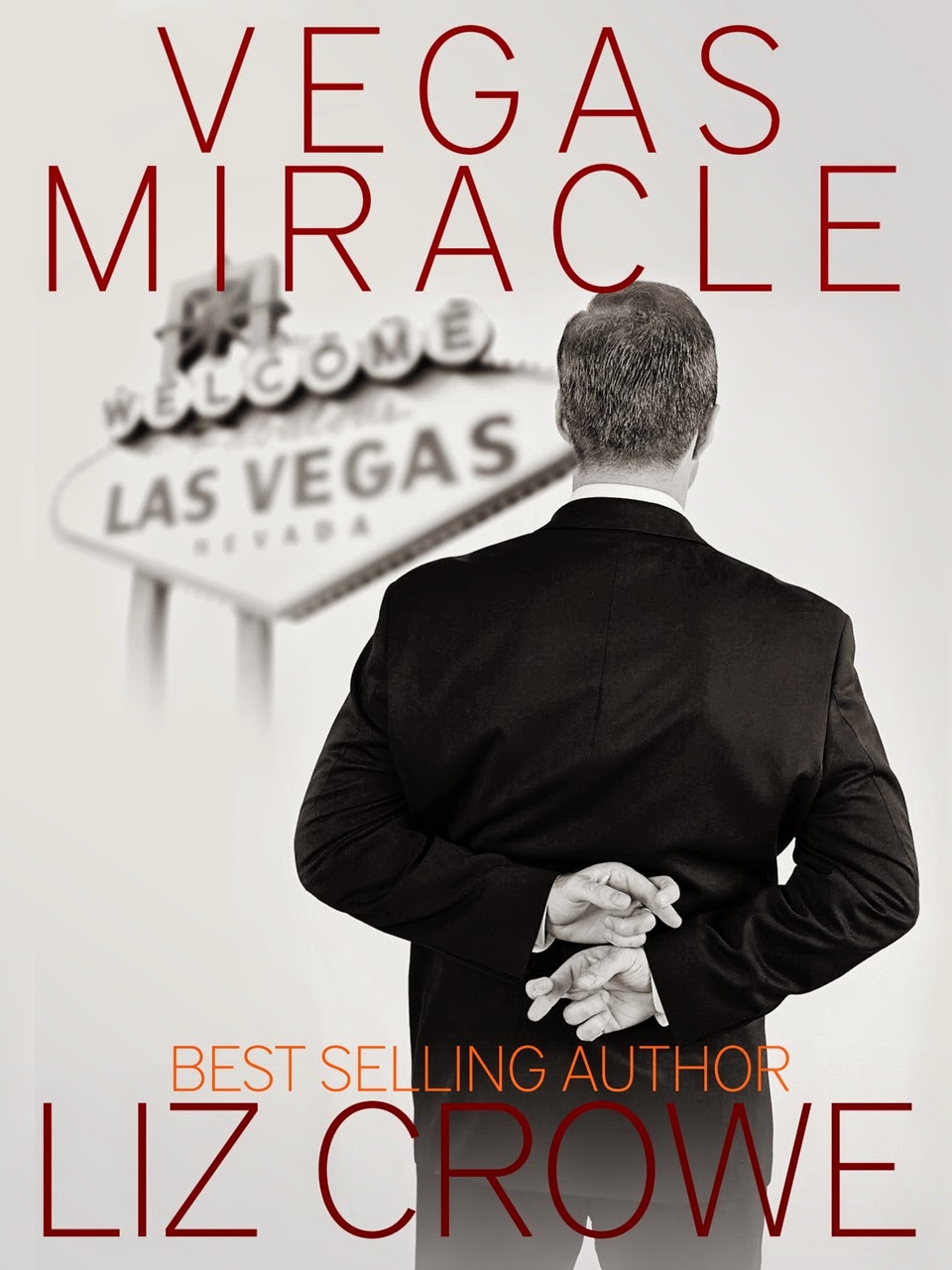 undeniable physical attraction that quickly evolved from whirlwind relationship to marriage. But lately, Ryan's become moody and distant. As their relationship starts to crumble, Ryan discovers something about himself he can't admit just as Grace realizes the young man she encounters at an invitation only party, Henri Christophe, a celebrity chef with the most successful restaurant in Las Vegas, is her husband's lover. But Henri holds a secret himself. He wants to be more to both of them.

As they attempt to make their unconventional arrangement work, Ryan's deep-seated fear of relationship failure continues to thwart everyone's happiness. When he finally walks away instead of confronting the emotional connection the trio shares, he returns to find their lives flipped inside out. A sought after hotel and resort consultant, Ryan has yet to meet a problem he couldn't solve. But when it comes to his own heart, he may be too late.

Her skin prickled with exposure to the cool air as his strong hands moved slowly up both legs. Henri focused on her hips, kneading out tension she always held there. But the innocent nature of the moment was long gone. The sensation of his strong hands on her made her want to lift up and expose herself to him. If he didn’t watch it she was going to come right here against this silly massage table.

"Let’s turn you over," he said as he held the blanket up modestly, which made her chuckle. He'd been close enough to finger her a few minutes ago and she wouldn’t have stopped him either so why the sudden propriety now?

She lay on her back as he sat next to her and took her arm on his lap, working through her shoulder tightness. When her fingers brushed up against what was an unmistakable hard on under his shorts, she gasped and pulled her hand away. 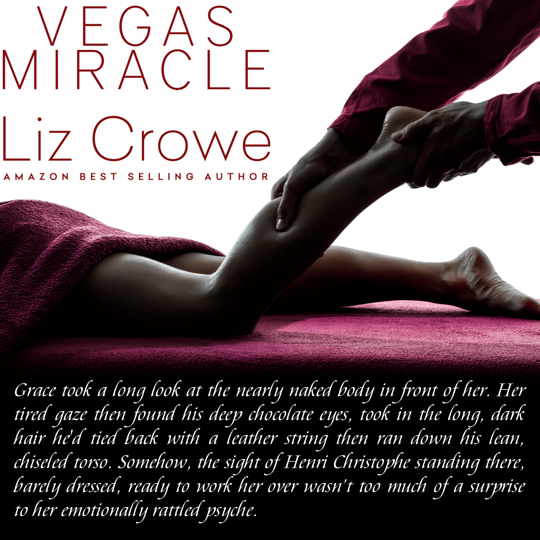 Henri put her arm back in place so he could continue to work his way down to her hand, which he caressed finger by finger and into her palm in a way that caused her breathing to quicken.

When he closed his lips over her index finger and sucked, her entire body zinged in response. He paid the same careful attention to each digit and ended with a light lick to the center of her palm, nearly sending her over the edge.

She was panting by the time he switched over to her other arm. She left her hand in his lap and brushed her fingers ever so lightly across the silky fabric of his shorts, just to see how he’d react. He shifted closer to allow her more contact and she stroked his full length twice before he took that hand to give it the same thorough and firm caress. By the time he closed his lips over her finger again, nothing prepared her for the fire of emotion and pure need his lips and tongue ignited.

Henri placed her arms under the blanket and passed a very light hand over her nipples, now hard buds of flesh poking through the fabric. Her breath came in shaky gasps by the time he uncovered one leg and propped her foot against his naked chest.    She gaped at his amazing muscle definition as he bent her knee to flex her hip. With each bend, his arm came in direct contact with her bare pussy.

Henri kneaded the flesh of her thigh before moving down to rub each toe, then the sole of her foot, which sent those same zinging, nerve rattling sensation straight up to the top her head. She stretched her hands over her head and allowed the blanket to fall away. Eyes closed, she reveled in the pure sensation of his touch. By the time he switched over to her other leg and placed her foot on his chest again, a low moaning sound had begun in in her throat and had to force herself not to grab him and pull him on top of her. He stretched her knee towards her chest.

"You're very flexible, yes?" His voice was hoarse.

"Yes," she breathed, tilting her hips up to make contact with his arm.

The last time he bent her knee she felt his tongue flick her nipple. She realized he was pulling the sheet off her completely and she gave no resistance. Raising her arms up over her head again, Grace stretched like a cat in the windowsill.

She heard him make a sound deep in his throat before he ran his strong hands from her shoulders down to her nipples and across her stomach. He stopped to knead her hips once more then kept moving down her thighs to her calves and then to her sensitized feet. She arched up and gasped as she felt his tongue again, this time right on her clit. He teased her flesh then sucked briefly before standing up.

Grace kept her eyes closed, her body was on fire, every nerve ending crying out for more. But he seemed to be done so she struggled up to a seated position.

""Would you like a bit more? An internal massage, perhaps?"

"Yes," she nearly yelled out then felt herself blush. “I mean…that’s sort of a lame line, though.”

He chuckled. “I’ll work on my lines a little, after this.” His low, accented voice made her shiver. 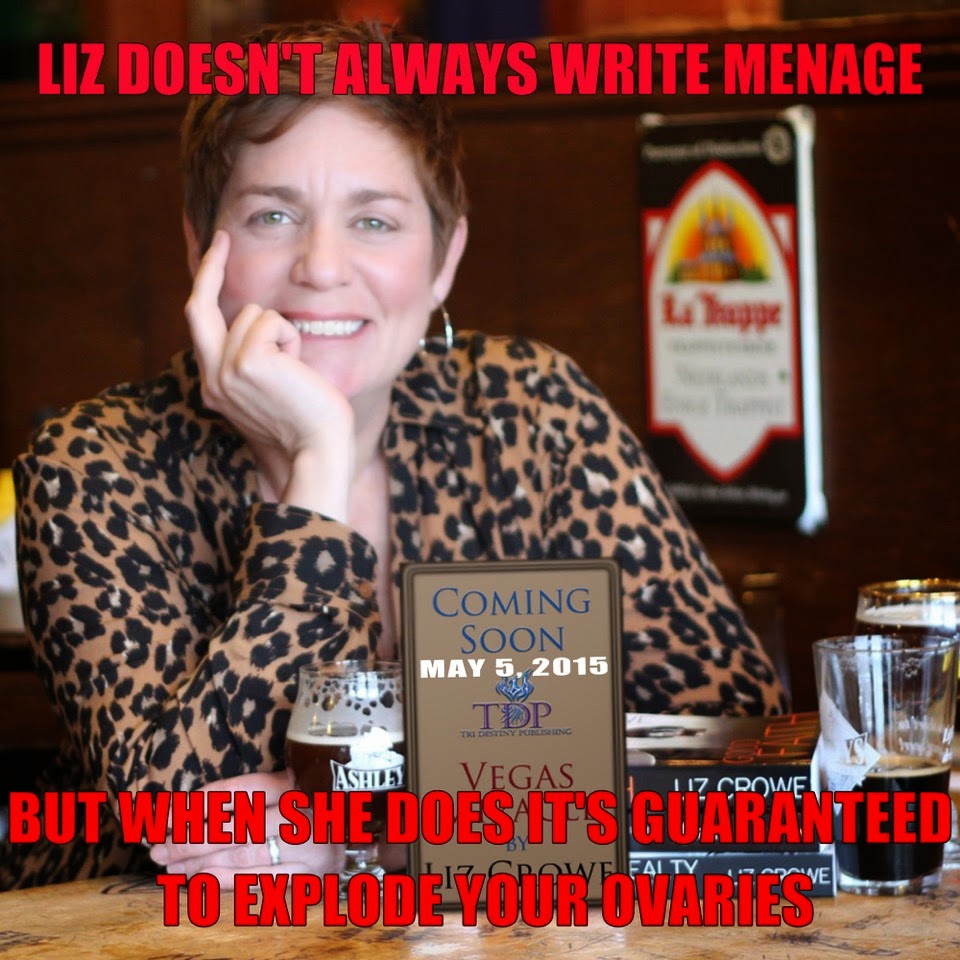 Amazon best-selling author, mom of three, Realtor, beer blogger, brewery marketing expert, and soccer fan, Liz Crowe is a Kentucky native and graduate of the University of Louisville currently living in Ann Arbor. She has decades of experience in sales and fund raising, plus an eight-year stint as a three-continent, ex-pat trailing spouse.

Her early forays into the publishing world led to a groundbreaking fiction hybrid, “Romance. Worth the Risk,” which has gained thousands of fans and followers interested less in the “HEA” and more in the “WHA” (“What Happens After?”).

With stories set in the not-so-common worlds of breweries, on the soccer pitch, in successful real estate offices and at times in exotic locales like Istanbul, Turkey, her books are unique and told with a fresh voice. The Liz Crowe backlist has something for any reader seeking complex storylines with humor and complete casts of characters that will delight, frustrate and linger in the imagination long after the book is finished.

Don’t ever ask her for anything “like a Budweiser” or risk bodily injury.

thanks for hosting me!