Super Book Blast ~ The Likelihood of Lucy by Jenny Holiday

It's a book blast and the book featured is The Likelihood of Lucy by Jenny Holiday. You'll want to comment. If you do, you're entered to win $25 Amazon gift card. Sounds cool, doesn't it?


THE LIKELIHOOD OF LUCY
by Jenny Holiday 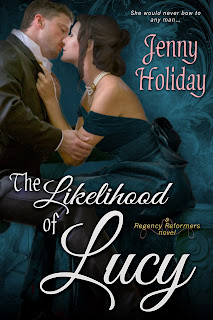 Trevor Bailey is on the cusp of opening the greatest hotel in London. His days as a gutter snipe are behind him, as he enjoys a life of wealth, society, and clandestine assignments as a spy in the service of His Majesty. Until one tumultuous night churns up the past he'd long left behind...

Turned out by her employer for her radical beliefs, Lucy Greenleaf reaches out to the man who was once her most beloved friend. She never expected that the once-mischievous Trevor would be so handsome and gentleman-like and neither can deny the instant attraction.

But Lucy's reformer ways pose a threat to the hotel's future and his duties as a spy. Now Trevor must choose between his new life and the woman he's always loved…

And now an excerpt:

“How do you know if you want to marry someone?” Lucy watched Catharine’s eyes for signs of shock. Still, better not to be too specific. “Hypothetically speaking, I mean.”

Catharine tilted her head and examined Lucy quizzically, making no mention of the abrupt nature of the query—the tea had only just been poured and the footman had hardly got the door closed behind him before Lucy unleashed the ambush. “How do you know if you want to marry someone? A good question. If you have options—and unlike most women, you do—it’s quite easy.”

That’s what she’d been afraid of.

“You should marry someone who makes you feel a very great deal of discomfort,” Catharine declared. “At least initially.”

Lucy swallowed the very unladylike string of curses accreting in her throat. “This discomfort you speak of. What does it signify? It would seem to stand in contradiction to what you said in our earlier conversations. You said that a woman should look for a man who concerns himself with his wife’s pleasure. Are not pleasure and discomfort opposing states of being?”

“No, they are not.” Catharine must have heard Lucy’s silent plea for an explanation, because she grinned. “I know it may seem that way. But in my experience, the degree of discomfort—misery, even—a man makes a woman feel is directly proportional to the amount of pleasure he can bring her.”

“But why must everything be so extreme?” Lucy cried. Then, embarrassed that her question had very nearly become a wail, she took a deep breath and tried again. “Is there no place in this world for more moderate sentiments? Contentment, say? Equanimity and intellectual compatibility? I’m talking about a feeling of being adequately matched. What is so wrong with that?”

“Nothing, of course. Many successful, pleasant marriages are built on just such a foundation. And I would never counsel a woman against accepting a man who brought those qualities to her life.” Lucy was about to protest that Catharine contradicted herself, when the older woman let
her teacup fall to its saucer with a clatter and looked intently at Lucy. “If she had no other options.”

Lucy slumped against the back of the settee, and when, after a few seconds, she didn’t speak, Catharine moved from her chair to sit beside her. “And let me make myself perfectly clear. We’ve been talking about pleasure, and given my reputation—and what you’ve seen of me in our colorful conversations with Emily—you probably assume that we’re speaking of the sort of pleasure found in the marital bed.” Lucy started to protest. She’d heard enough already—her
worst suspicions had been confirmed. But Catharine waved away her objection. “We are, of course. And heaven knows Emily likes to tease me about my, ah, fondness for that kind
of pleasure. But that’s not really what I’m talking about.”

“What are you talking about, then?” Lucy whispered, fearing the pronouncement was about to get worse.

“Love. I’m talking about love. I shy away from the word, generally.” She shrugged. “I’m like a man that way. But what I’m trying to say is that if you have any choice in the matter, you should marry someone you’re in love with.

Lucy turned. “And a good morning to you, too.” Another precept she’d always tried to instill in her pupils—a false show of confidence could sometimes lead to the real thing. Not that she was preaching affectation. Never that. Mrs. Wollstonecraft—her guiding light in all things—would not
approve.

He did not stop scowling. “You are a guest here. Guests don’t clean.”

“Well somebody has to. Beds don’t make themselves.”

“I don’t make mine. Why bother? You’re just going to get into it again later.”

She would have laughed, but he seemed perfectly in earnest. And she had to admit there was some logic to his position. Still, she felt compelled to defend herself. “A servant worth his or her salt would not be able to look at an unmade bed and not remedy it. You have no servants at all?”

“I’ll have an army of them when the hotel opens—a hiring spree is my next major task, in fact, and not one I’m looking forward to. For now, I have a woman who comes in for half days and cooks. But no one enters my private apartments. Ever.”

“Yes.” He moved to the bed and threw the counterpane back, undoing her work. “And you’re not a servant.”

She had to cover her shock at his deliberate mussing of the bed. “That’s debatable. The fate of the governess is to be forever lodged in the limbo between the household and its staff. She is not quite a servant, not quite a member of the family. Mary Wollstonecraft once wrote, ‘A teacher at a school is only a kind of upper servant, who has more work than the menial ones. A governess to young ladies is equally disagreeable.’” Clamping her mouth shut, she checked herself. There
was no need to start up with Mary. That was exactly what had landed her in this mess to begin with. It’s just that Mary’s words were always so close to Lucy’s heart. It was difficult to censor herself sometimes. But that’s exactly what she had to learn to do if she was lucky enough to secure another position.

“Be that as it may, at the Jade, you are a guest.” He set a package on the unmade bed. “Put this on, and then we’re going out. I’ll meet you in the kitchen.”

He was gone before she could answer.

Jenny Holiday started writing in fourth grade, when her awesome hippie teacher, between sessions of Pete Seeger singing and anti-nuclear power plant letter writing, gave the kids notebooks and told them to write stories. Most of Jenny's featured poltergeist, alien invasions, or serial killers who managed to murder everyone except her and her mom. She showed early promise as a romance writer, though, because nearly every story had a happy ending: fictional Jenny woke up to find that the story had been a dream, and that her best friend, father, and sister had not, in fact, been axe-murdered. From then on, she was always writing, often in her diary, where she liked to decorate her declarations of existential angst with nail polish teardrops. Eventually she channelled her penchant for scribbling into a more useful format. After picking up a PhD in urban geography, she became a professional writer, and has spent many years promoting research at a major university, which allows her to become an armchair astronomer/historian/particle physicist, depending on the day. Eventually, she decided to try her hand again at happy endings--minus the bloodbaths. You can follow her twitter accounts @jennyholi and @TropeHeroine or visit her on the web at jennyholiday.com.

Thanks for having me, Wendi! :)

Gotta love those early women who believed women were equal to men without them, we'd currently listen silently to jokes about women being chained to the stove or bed while wondering if something better existed.