Within the Crumbling Walls ~ Lucy Felthouse


I've found that the longer I've been writing, the more I find inspiration in the strangest places. And sometimes the inspiration doesn't strike me until much later. My story in Smut in the City is a perfect example of this. 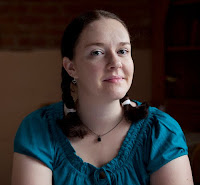 I went to Rome in May 2012 for the first time. I fully expected to come home with some ideas for stories, and given I needed to get my story written for Smut in the City when I got back, then that was perfect. What I wasn't expecting, however, was for the inspiration to come from the Colosseum. It's an absolutely awe-inspiring place, but it's so busy and crowded that getting up to anything sexy would grant you a large audience of onlookers and possibly some time spent in an Italian jail.

And voila, Within the Crumbling Walls was born. Now, I know my ideas are sparked by unusual things, but I think a metal barrier has got to be the strangest.


*****
Within the Crumbling Walls
By Lucy Felthouse
Exiting the Colosseo Metro station, Libby shot a grin at her boyfriend, Ciaran. “I don’t think we’ll have any trouble finding it, do you?”
“Hmm?” Ciaran frowned, then turned his gaze in the direction that Libby was pointing. He gave a sheepish smile. “No, I don’t think we will. Shall we put the map away?” 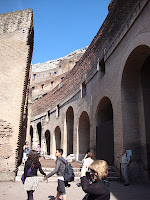 Libby nodded, and Ciaran spun round so she should take the map and load it into his backpack. Zipping it back up, she patted it twice to signal she was done. Ciaran turned and held out his hand. She took it, and together they took their lives in their hands crossing the busy Roman road and walked to the Colosseum.
Despite the early hour, the queue was already considerable, and the couple exchanged a wry look. But then Libby remembered something. “Hey, don’t look so glum babe. We can skip the queue, remember?”
Ciaran frowned. “We can?”
Pulling a small credit card shaped and sized item from her pocket, she replied, “Yes! Our Roma cards mean we can get in quicker. That was one of the selling points the rep kept going on about when she was trying to flog them to us.”
Ciaran slapped his forehead theatrically, then retrieved his own card from his pocket. “Of course!” He used his not inconsiderable height to peer over the heads of the group in front of him. “Okay, I see it. There’s a separate line for Roma Pass holders, and it’s moving tons quicker. Hurrah!” 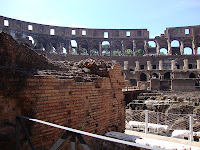 He made his way through the crowd, using a combination of touches on people’s backs and the words “excuse me.” Libby followed quickly in his wake. Soon they were at the back of the very short and swiftly-moving queue. People passed through, showing their cards to a very stern-looking Italian man, who nodded and pointed them towards another line.
This time they scanned their cards through some kind of barcode reader, and finally, they were in. Within the crumbling walls of the ancient Colosseum, probably the most famous landmark in Rome. Looking around, Libby could see why.
Photos and videos didn’t do it justice. She wasn’t sure if Colosseum translated to colossal or not, but it was certainly the most apt word to describe the place. It really was huge—and they hadn’t even seen the best part yet. Following Ciaran from the ticket booth area—which was literally within the great walls—they passed out into the open area in the middle. Libby gasped. It was amazing.
They were at ground level, with two or three levels above—she wasn’t sure which—and of course, the one below. Where the gladiators, warriors and fierce creatures would have been kept before being forced to fight in the arena. 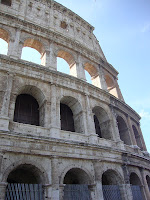 Realising Ciaran was gaping at the sight before them too, she encouraged him forward. “Come on, we’re kind of in the way here.” Looking left, she saw an area which was fenced off and held warning signs urging the public not to enter. Libby snorted. The whole place was falling to pieces, how could they possibly deem one section more dangerous than another?
Shaking her head, she turned her attention to the right and saw an area which would allow them a better view of the arena floor. She grabbed Ciaran’s hand and pulled him with her.
Leaning on a barrier and looking out, Libby saw that arena “floor” was not an accurate description. At one end of the enormous structure, a wooden base had been erected, but the rest of the oval was open, displaying what lay beneath. It looked like a labyrinth, and suddenly she became aware of an English-speaking tour guide telling his group the history of the place. She eavesdropped for a while, then fell to thinking how lucky she was to have been born in this day and age. She’d never know anyone who’d be thrown to their deaths in such a place—or be forced to watch them killed in such a brutal manner.
*****
Sultry, smouldering sex in the city is the theme of this erotic anthology, edited by Victoria Blisse and Lucy Felthouse.
From the stifling heat of the London Underground to the crumbling walls of Rome’s Colosseum, Smut in the City has it all. Whatever your interpretation of sultry urban sex, there’s something nestling between the covers for you. Lusty couples, horny office workers, hunky bakers and gardeners, tourists and the Mafia are portrayed for your titillation in this exciting collection of stories from erotica’s finest authors.

More info and buy links: http://lucyfelthouse.co.uk/published-works/smut-in-the-city/
*****
Lucy is a graduate of the University of Derby, where she studied Creative Writing. During her first year, she was dared to write an erotic story - so she did. It went down a storm and she's never looked back. Lucy has had stories published by Cleis Press, Constable and Robinson, Decadent Publishing, Ellora's Cave, Evernight Publishing, House of Erotica, Ravenous Romance, Resplendence Publishing, Secret Cravings Publishing, Sweetmeats Press and Xcite Books. She is also the editor of Uniform Behaviour, Seducing the Myth, Smut by the Sea and Smut in the City. Find out more at http://www.lucyfelthouse.co.uk. Join her on Facebook and Twitter, and subscribe to her newsletter at: http://eepurl.com/gMQb9