Tuesday in Toronto ~ A Guest Post with Giselle Renarde, Author of “Saturday on a Tuesday” 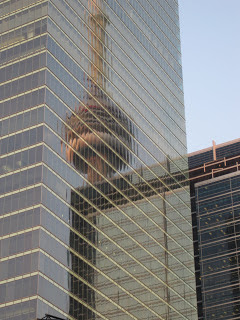 Which city, you ask?

Some authors were inspired to write about the romance of cities they’d visited, but I’m not much of a traveller so I wrote about the city I live in. I wrote about Toronto. More than that, I wrote about people who live here, doing what many of them do: working long hours in glass towers.

Yes, I wrote about office workers. Why? Because when I think about the city, it’s business that comes to mind. Ducks’ feet kicking wildly and never quite managing to maintain slick operations.

My story “Saturday on a Tuesday” opens on overworked, underappreciated, middle-aged Gemma sitting in her office at eight in the evening, staring at the CN Tower. Until she gets up for another cup of coffee, she has no idea someone else is still at work.

Here, have an excerpt:

With her coffee cup in hand, Liddy slumped into one of the lunchroom chairs. “I can’t stand the thought of going home to an empty apartment.”

“I could come with you,” Gemma offered.

Liddy rolled her eyes and laughed, like she thought it was a joke. She took a sip of her coffee, and then stared into the mug in silence. “Can I tell you a secret?” “Absolutely!” Gemma abandoned the counter without a coffee. She didn’t need one anymore. She was electrified by the possibilities.

Biting her lip, Liddy traced the outlines of her plain white mug with one finger. She heaved a sigh. “My girlfriend left me. I had a girlfriend and… now she’s gone.” Gemma’s pussy throbbed in time with her racing heart. “I didn’t know you had a penchant for women.”

“Nobody knows.” Liddy bowed her head and her long hair feathered the sides of her coffee cup. “That was the problem, according to Sarah. She called me a Saturday Night Lesbian.”

“Oh yes,” Gemma agreed. “A woman who’s crazy for pussy on Saturday nights, but acts like she’s straight the rest of the week.”

Liddy’s eyes seemed so sad, but she smiled sweetly. “I’d never heard it before. Sarah had to tell me what it meant, and I was so hurt. She thought I was ashamed of myself, and ashamed of her.”

Every Tuesday in Toronto can’t be full of hot, kinky lesbian bondage and office sex… but this one sure is!