Football Quote of the Week on Wednesday 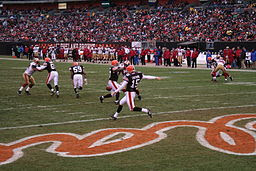 It's playoff time and bowl game time, so there won't be many football quotes left to get for a while. I've got another three weeks or so and I've got a handful saved up. Should get us through the middle of February...when NASCAR starts up!! YAY!

So here are the football quotes of the week:

"He squeezed it in there in the eight hole, but it worked..."

My question, why did he have to look? Isn't it a man thing to just KNOW where to stuff it? Callin' 'em like I see 'em.

Another sticking and stuffing... geez. Someone will have a sore body part soon.

And the last one... this one is for the Roll Tide crowd. My OSU didn't make it to a Bowl Game because of their own... questionable decision. The Golden Flashes made it to the GoDaddy Bowl, but didn't win. Oh well. Hey, they got there, yanno? So here's the last one direct from Brent Musberger.

Um... wow. Okay. I've got a dirty mind, but that... taken out of context... is just really bad. Good thing he was talking about running the ball after it was caught.

Well, enjoy! We don't have much time left before the quotes turn into NASCAR, and trust me, there's a whole cornucopia there. Enjoy!

Bluehost is the best website hosting company with plans for any hosting needs.