I'd like to welcome Leah Petersen today to the blog. I'm happy to have her here. She's talking about her book, Fighting Gravity and the questions I came up with. Be sure to comment on the blog to get entered into the giveaway. What's up for grabs? The author will be giving away a prize pack containing these items hand knit by the author: a hat, a replica of the symbol of an important institution referenced in Fighting Gravity to TWO randomly drawn commenters during the tour. Here's the link to keep following the tour!

What was your favorite scene to write in Fighting Gravity?

Well I can't tell you too many details about it because it's part of the climax of the story. But without spilling too much, it's a confrontation scene, heavy on both the emotion and the testosterone. It's fueled by heartbreak, feelings of betrayal, love, loss, longing, and good old fashioned pride. I loved it so much that I wrote four different versions of it in the first draft.

What was the inspiration behind Fighting Gravity?

The idea came out of a dream I had of a boy being taken from his home by a totalitarian government who had identified his genius for physics and wanted to use him for their own ends. Everything developed from that point, following this boy who had been taken completely out of his element and away from everyone and everything he knew. 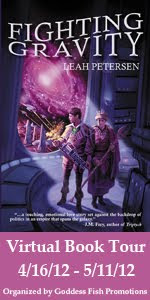 What is the most interesting thing you've done in the name of research?

Read m/m erotica? Maybe that's not the most original, but certainly the most fun.

Frustrating has been all the other stuff besides writing. I'm not big on organization or lists of things to do. So learning about the industry, staying informed, making connections, doing industry research, sending in submissions, querying agents and publishers, and then all the marketing that comes into play once you've finally got a deal was pretty overwhelming to me. Still is, actually.

The most rewarding is when someone tells me they loved my book. Not because it's mine, but because when I finish a great book I just want to tell everyone about it, to talk and talk and talk about it. I couldn't do that when I finished Fighting Gravity because no one else had read it and unless I was emailing out the Word doc, they couldn't. So now that it's out there, when I hear someone say “OMG, I loved it when Jake…” I just want to squeal and say “I know, right? I loved that too!”

A good British accent gets to me. Boring, but true.

In real life I'm had to distinguish from the next WASP with 2.5 kids and a mortgage.

If you could ask the readers one question what would it be?

Did it make you cry? That's the ultimate measure of writing success to me, and the part of any book I always want to talk about. The saddest or most wonderful scene that was so intense it moved you to tears.

It involves a punching words into a laptop and beer. How much of the former depends on the later.

Right now, the sequel to FIGHTING GRAVITY. After that, I have a sneaky feeling I'm going to write fantasy. But we'll see.

Best: The finished product. Worst: The business side of it. It takes so much time away from actually writing, which was originally the whole point.

What is your method of breaking through writer's block?

I go for a drive. A long, boring road will fix most plot problems.

Seeing how what I've written affects other people. There's no better drug than knowing you were able to give someone else the same sort of experience that other writers gave to you. Don't ever underestimate the power of telling an author you appreciated their book.

Can you tell us a bit about what book(s) you have coming out next and what you're working on now?

The next book's the sequel to FIGHTING GRAVITY, currently titled IMPACT VELOCITY. I can't really tell you what it's about without spoilers for the first book. I've got a good draft of it, though, and am now working on the third in the trilogy. 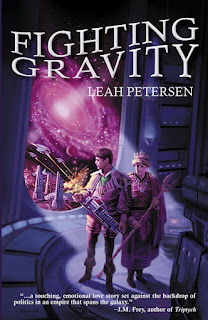 Depends on the person. I like a nice butt, though. Probably because I don't have one.

Evening. When the whole family's home, work's over, and it's socially acceptable to drink.

Dance music. ;) I don't know what the genre is but I always start dancing to the stuff they played in clubs when I was a teen (
Posted by Wendi Zwaduk and Megan Slayer at 2:30 AM

Thanks for having me today, Wendi!

Thank you for hosting Leah today.

How sad to think of a young boy taken from his family. I hope it ends well. It has to.

You're welcome. Yesterday was a crazy day, so I didn't get a chance to come by and comment, but I am now. :-) Great interview.