Three is their magic number. Now they’ve got to decide if the magic is worth saving. 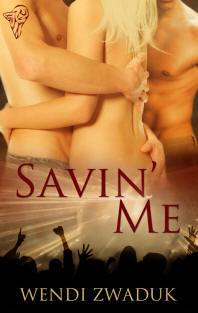 It’s time to bring the magic back. Parkur has never been convinced the split was for good. They were meant to be three. But can he write the music to convince Juniper and Jacoby to give him a second chance?

Juniper and Jacoby want the triad intact. Is the love they shared as three enough to erase the destruction in their collective past?

Reader Advisory: This book contains two heroes hell bent on making sweet music with the woman of their dreams, the rediscovery of passion between three people, hot manlove and ménage action, a little spanking, some toy play, and some bondage...oh yes...

And here's the moan!

Jacoby slapped Parkur’s bare ass. “Mine.” He fingered the collar about Parkur’s throat. “You are mine.”

“Remove my shirt. I want that mouth on my nipples.”

Inch by agonising inch, Parkur unbuttoned the buttons down Jacoby’s shirt and exposed more and more of his flesh. He scraped his nails down Jacoby’s chest, leaving three red scratches on the pale skin. Jacoby thrust his hands into Parkur’s hair and held him against his breast.

Juniper squeezed her legs together. Parkur hadn’t even put his hands on Jacoby’s dick yet and she already wanted to come. Hell, neither man had touched her. She licked her lips as Parkur sucked on Jacoby’s mocha-coloured nipple. She loved to run her tongue over every last bit of Jacoby’s body. She dug her fingers into the tops of her legs. Double damn it. No touching herself, either.

Grinning, Parkur worked the mechanism on Jacoby’s belt then unfastened the button of his jeans. He divested Jacoby of both the pesky denim and his boxer shorts in one downwards tug. Parkur stood and grasped both his cock and Jacoby’s cock in his hand. Their twin piercings sparkled in the low light.

“I missed this,” Parkur whispered.

“On your knees.” Jacoby’s voice came out ragged and slithered over her skin.

The words were a command, but the tone of Jacoby’s voice amplified his need and his inner turmoil. Jacoby obviously loved being in control, but could he fall back in love with Parkur? Juniper wished both were possible. Even after the fights, the bitter words and the parting, she still loved both men.
Posted by Wendi Zwaduk and Megan Slayer at 8:15 AM