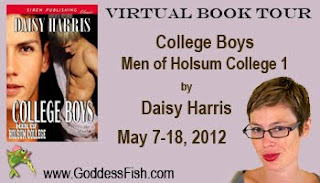 Okay so I knew that sounded a little...questionable. But I got your attention. Daisy Harris will be here tomorrow with her book, College Boys. Want to know more about the book? I'm getting there. First let me tell you, you should comment tomorrow. Daisy will be awarding a $20 Amazon GC to one randomly drawn commenter during the tour and a $20 Barnes and Noble GC to the host with the most comments. Sounds like a good idea to me. Want to follow the tour? Here's the link: http://goddessfishpromotions.blogspot.com/2012/03/virtual-book-tour-college-boys-by-daisy.html

Here's a little bit more about Daisy!
Birkenstock-wearing glamour girl and mother of two by immaculate conception, Daisy Harris still isn’t sure if she writes erotica. Her paranormal romances start out innocently enough. However, her characters behave like complete sluts. Much to Miss Harris’s dismay, the sex tends to get completely out of hand. 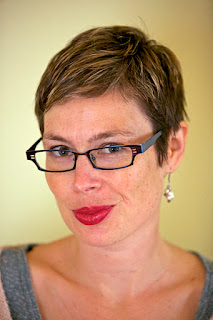 Here's the blurb for College Boys:

When soccer star Chris moves next door to an openly-gay classmate, he doesn’t realize the wall between their rooms will be so thin he’ll hear his neighbor’s every move. But soon he and Peter become friends, and Chris is intrigued—imagining what happens on the other side of the wall.

Active on the Queer Student Council, Peter wishes he wasn’t so damn hot for his straight neighbor. He can’t tell if Chris is flirting or in denial or what, but Chris’ innocent overtures lure Peter into flirtation that throws his world into chaos. Peter doesn’t want to date a closet case, but he desperately, passionately wants Chris.

Soon Chris must choose whether to run away from his new feelings or embrace a relationship with the guy he loves. And Peter must decide if he can give his heart to a guy who hasn’t yet figured it all out.

And because I want to tease you for tomorrow... here's an excerpt that's not safe for work:

Chris blinked open his eyes, wondering for a second what had woken him up. But then a creak of bedsprings carried through the wall from Peter’s room. The music was on, too. Nothing loud—just the kind of quiet trance music Peter played at night that acted more like white noise than anything else.

He was just about to open his mouth to say “hi” when he heard a low and guttural male groan. Chris’s entire body tensed—all the way from his toes, over the tip of his cock, to where his nipples rubbed against his frayed flannel sheets. He’d been sleeping on his stomach, and he feared rolling over and letting Peter and whatever guy he’d brought home realize Chris was awake. 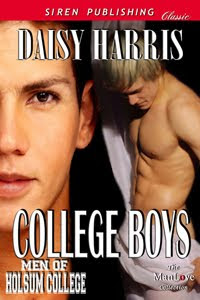 Chris’s mind went blank. Getting fucked in the ass? Fucking someone in the ass? His brain had no images to connect to those concepts, though he’d heard guys snicker about it behind their hands.

A quiet moan and the words “suck it” carried through the wall, followed by a rapid-fire squeaking like Peter’s bed was bouncing off its hinges. Chris bit his lip to stop from moaning himself. His dick was a steel pipe trapped between his belly and mattress. He fed his hand down, conscious of the whisper of his knuckles through his sheets. When he palmed his erection, he pressed hard enough to see stars.

The groans from Peter’s room rose, getting more desperate, but they were slow and languorous. It didn’t match the near-constant jerking noise of Peter’s bed, so it was hard for Chris to picture exactly what was going on. He’d only had sex a couple times, but it seemed that the moans usually matched tempo with the thrusting.

Another noise, louder and more breathless, carried from the other room, and this time it was unmistakably Peter. Oh God. Was he with two guys? Chris wanted the wall to become see-through. He wanted to peek through Peter’s keyhole and see every last detail, every openmouthed moan and twitching muscle. He wanted to watch Peter’s eyes screw up in pleasure and see how his body bowed when he was about to come.

He strained his hips into his hand, struggling to keep the bed from shaking, the springs from rattling. The constant squeak-squeak-squeak of Peter’s bed was loud enough that Chris thought maybe he could risk moving. He pressed his cock through his cupped fist, so slowly his eyes rolled back in his head. Holding his breath, he pulled back, but the loss of pressure was enough to squeeze his nuts in a vise, and he speared into that palm again, not caring when the frame beneath him groaned.

“Fuck.” He couldn’t resist another pump. Just one more and he might be able to come. Tucking his hips up off the mattress, he propped up on his elbow. Then, when a gasp from next door was so loud and desperate that Chris thought he might pass out from not shooting, Chris pumped his cock through his hand so fast that his bed let out a long squeal. But Chris didn’t care because he was thrusting hot and fast into that tight grip, and he imagined Peter shaking below him. Next door, Peter’s bed was bouncing to the jerk of his hips and it was so good Chris felt blind with the pleasure.

His balls twisted close to his body, sending spears of heat up his back. Chris arched into his fist and felt his cock pulse right before he shot, wet and sloppy, onto his sheets. He froze and held his body off the bed. Chris listened hard for whether Peter or one of his friends had heard, but the room next door had gone curiously quiet.

That is quite a tease. Thanks for sharing!