Today's Monday Moan comes from What Might Have Been. I loved writing a story of a high school reunion gone right. Here's a little bit more about the book: 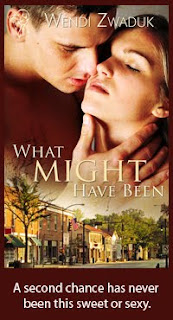 A second chance has never been this sweet or sexy.

Macy Shibley left Mason, Ohio, to figure out who she was and what she wanted. But after more than a few disastrous relationships, she refuses to let anyone tie her down. She’ll control the tying, thank you very much. No man has ever managed to chip away the walls around her heart...except for one man.

Tanner Connolly has never forgotten his high school crush. The sweet blonde with the vibrant eyes fills his dreams and fantasies. He’d had a shot in school to make her more than a friend, but blew it for the sake of appearances. Now he’d like to know what might have been and use it to create a future. But he’ll have to let her go to prove he wants more than one night...

And here's the moan!

At the word ‘love’, her brain shut down and her body took over. She’d let herself get too damn close to true emotion. No more. “Fuck me.”

Tanner tore the tunic up over her head and tossed it somewhere out of her line of sight. Her nipples pebbled under his intense azure gaze and heat flooded between her thighs. She tipped her head back to succumb to his kiss. He nibbled along her jaw, his day-old whiskers abrading her cheek. He caressed her backside. “I want to take you everywhere.”

The longer his hands lingered on her ass, the more she wondered what he meant by ‘everywhere’. Something in his voice alluded to deliciously wicked things she’d tried many times, but would never have thought he’d enjoy. She gyrated against him to relieve a hint of the need overwhelming her senses.

His dick, long and hot, jabbed her lower belly. Macy fumbled with the buttons of his shirt and exposed his rippled chest, inch by glorious inch. Her mouth ran dry as she pressed her lips to his taut muscle and kissed the calligraphic Connolly tattoo over his heart. The letters swirled and tangled, almost like a web to protect him. She moaned and bit down. A man didn't get a body full of lean strength like this by working out at the gym. No, his kind of muscle came from working outdoors. The scent of his cologne—something woodsy—flowed over her like a lazy river.

“Yes, babe.” His fingers dug into her ass, not that she cared. “Take what you want from me and make me yours.”
Posted by Wendi Zwaduk and Megan Slayer at 12:28 AM