I've had menage stories on the brain lately, so I thought I'd share a snippet - a moan, if you will - from Tangled Up. I love this story because it was my first foray into MM. THe characters have intrigued and outraged people. I even continued the story in the reverse in Someone Like You. Let me share a snippet of it with you.

What if the person you want for the rest of your life isn’t one... but two? 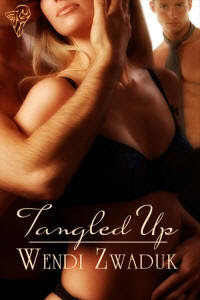 Mindy Mayes knew her husband was bisexual from the moment they met. She loved Arran with her whole heart until the day he asked for a separation to be with his partner, Sav. Through the ups and downs of life after the marriage, she, Arran and Sav remained close.

Things are about to change.

Maybe the perfect number is three after all.

And now for that moan!

Without thinking, she grasped for their outstretched hands. When they touched, tingles shot through every cell in her body, mixed with something else.

Peace. Being with both of them felt right, destined. Keeping their fingers entwined, Arran stroked the top of her hand with his thumb. Sav disengaged from Arran and stood, taking his place behind her. Mindy licked her lips and stared at Arran. How long had it been since she’d tasted his kiss? Too long.

Sav released her hand and shrugged out of his shirt. The garment fluttered to the floor at his feet, revealing his broad shoulders and hairless torso. “We need to pamper our guest.”

Hand in hers, Arran propped himself up on one elbow. “What have you got in mind?”

She squeezed Arran’s fingers to hide the slight tremble.

“I’ll be right back.” Sav tossed the discarded clothes into the hamper and stepped into the adjacent bathroom.

Mindy shifted her gaze back to the delicious view of Arran’s nude body. His cock, long and thick, lay against his thigh, semi-erect. Her mouth watered. Arran smirked. He stroked the inside of her wrist with the pad of his thumb. “Hello, beautiful.” Heat seared up from her toes and down from her chest to collide in her pussy. Damn. The man spoke and all she could think of was sex.

After what seemed like mere moments, Sav appeared at the foot of the bed with a pair of shiny handcuffs dangling from his index finger. “Arran, help her out of her coat and into these. I want to see her bare.”

Her eyes widened and her gaze locked with Arran’s. The soft blue depths of his eyes and the gentle yet fierce smile chipped away at her restraint. Arran balanced on his knees and unzipped her coat, taking extra time between her breasts. Once finished, he ran his fingers through her tresses. Her scalp tingled. Was the scalp an erogenous zone? She wasn’t sure and didn’t care. He nuzzled her jaw and unbuttoned her over-shirt. “You’re still so sexy.”

Her pussy creamed. No other man knew how to make her body come alive with a couple of kind words.

Before she could protest or change her mind, the cotton over-shirt fell to the floor and Arran yanked her work T-shirt over her head. Sav took it from his hands and tossed the second garment to the pile with her other shirt. Her nipples ached in the simple sports bra, heavy and aroused by their gentle, yet determined, touches.

“Our girl’s hot for us,”Arran murmured and sucked a turgid peak between his lips through the material. She moaned, her head lolling on her shoulders.

“So pretty,” Sav cooed. He smoothed his hands down her arms until he grasped her wrists. He gently tugged her hands high in the air. “Arran.”

At the one-word command, Arran released her nipple and produced the cuffs.
Posted by Wendi Zwaduk and Megan Slayer at 11:26 PM

Wow. Awesome excerpt! I haven't read this one yet but it's on my wish list now!

Thanks Michelle! i hope you like it and if you do, there's a prequel in Someone Like You. Just so ya know. :-) Let me know what you think of it!