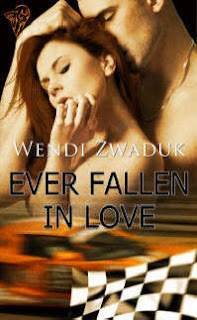 Tucker lost the love of his life once, but this time, he’s not taking no for an answer.

Once a driver, always a driver...

Racing consumes Tucker Poston’s life. Until he sees her again...Megan Rodney. She’s the one person to come between him and his ride. She’s the only woman to understand him. The only woman he’s ever loved. Circumstances tore their love apart. Now he’s determined to show her the contents of his soul, even if it means losing his heart.

Being a driver doesn’t warm his lonely nights. Too bad she’s not interested.

Megan’s not about to fall for his smooth lines and slick image. She’s got a good life as a team owner for a stock car team. Still, memories of their love affair burn bright in her mind. What’s a girl to do when the man of her dreams, the man who pushed her away, wants a second chance at forever?

“Tucker, we can’t do this.”
“I don’t give a damn what anyone else has to say.” His erection jabbed into her belly. “I know what I want—and you’re it.” Tucker nuzzled her neck, nipping and licking a path along the gold chain she wore. “And you’re still wearing my necklace.”
“We can’t do this because you work for me.” She clawed at his shoulders. For purchase? To push him away? Hell, she wasn’t sure.
“Season’s almost over. November’s here with two races and a bye week to go.” The gravel in his voice radiated to her core. “And you haven’t said why you’re wearing the teardrop.”
“I told you. It matched my skirt.” What a liar she was. “You can’t prove I’m still interested.”
“Other than your wide eyes.” Tucker palmed her breast beneath the protection of his jacket and her cotton dress shirt. A groan vibrated in his throat as her nipples pebbled under the silky tank and the lace of her bra. “And the flush on your cheeks. But I can test my theory.” He rubbed his erection against her thigh. Megan gasped to catch her breath. “You respond to me, babe. You get the me no one else knows about.” His hands moved under her blouse, teasing the bare flesh of her stomach and sending pinpricks of sensation to every part of her body. “Damn this feels good,” he murmured. “You feel good.”
Tucker scooped her into his arms. “I don’t want to stop until your bottom is rosy and you’ve come from my hand five times.”
“Just five?” Her voice sounded breathless and needy in her ears. She screeched as cool metal met bare skin. “Tucker!”
“Mmm. We’ll fuck until the sun comes up. Handcuffs, toys… I don’t care.” He worked the rest of her tank top out of the hem of her skirt. “I love hearing my name on your lips.”
“Where are we?” She placed her hands flat on the hood of the car, her legs akimbo. “Won’t someone see us?”
“I own everything in a fifty acre radius. If someone’s spying, they’re also trespassing.” He skimmed her gauzy skirt up over her knees. Passion blazed in his eyes. “You are so damned sexy in cowboy boots. Come here.”
Megan scooted to the edge of the hood, the movement pulling up her skirt and exposing her legs to the lacy edge of her panties. Tucker kissed her, his tongue tangling with hers as he slipped the straps of her tank top and bra from her shoulders. The heat from his touch matched the fire in her blood. Her underwear dampened as he nuzzled the hollow of her throat.
“Tucker,” she murmured.
He raised his head and stared at her a moment. “Beautiful. Fucking beautiful.”
She instinctively moved to repair the damage to her attire. He stilled her hands.
“I like seeing you aroused. The primal look in your eyes. Your lips are a little swollen. Makes me hard as steel to know I made you so hot.” Tucker shoved the hem of the shirt up over her breasts and unclasped her bra. Her nipples beaded in the chilly air. Raw hunger flickered in the depths of his eyes. “I need to taste you.”
Posted by Wendi Zwaduk and Megan Slayer at 1:39 PM

Wow, that's all kinds of hot!