I Wanna Be Loved by You ~ Part Two 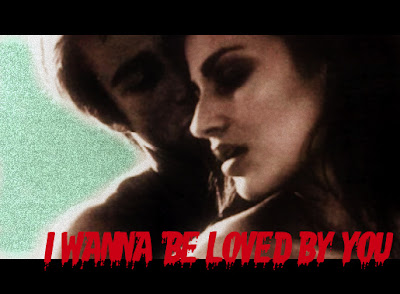 Angel wasn’t her name. Ty cringed. Damn. He’d always managed to be so suave with girls. Not this one. She was completely aloof to him. Was that the draw? Or was it her body? He itched to wrap his hands around her waist, to run his fingers through her silken hair and to feel those lips on his. He shifted his weight from one foot to the other.

“I’m sorry. I wasn’t sure what your name was and I wanted to find you. I’d like to apologize. Those guys are friends but, there’s no excuse for them. Do you need your wings dry cleaned? I’ll gladly pay for it.”

She didn’t respond. Was he babbling? Had to be. Damn it. Then again, he wasn’t so sure he wanted her to be like the other girls he knew. If she’d fallen at his feet, he’d probably have walked away by now. He kind of liked that she barely gave him the time of day.

Her shoulder moved a fraction of an inch.

He bit the inside of his cheek. What the hell...he’d try one more time. “Would you tell me your name? Mine’s Tyler, but everyone calls me Ty.”

She still didn’t say anything or turn around. He groaned. “The one chick I’d like to hit on an she ignores me,” he muttered.

Ty stared at her. She’d talked. He’d heard it, but he couldn’t quite get over the amazement. “What?” He inched around to look at her face. “Livia? That’s a pretty name.”

“Thanks.” The start of a smile curled on her coral lips. Glitter shimmered on her pale skin. “This is your party?”

Crap. She wasn’t impressed. Hell, after the way the guys treated her, she shouldn’t be impressed. “Me and my roommate, Glenn. He likes Halloween, women and beer.”

Livia’s blue eyes glittered in the moonlight. “And you?”

“I wasn’t interested in the party or the beer. I don’t drink, but I like women and the moment I saw you walk in...you captivated me.”

“Does that line ever work?” Silver flickered in her eyes. “Never mind.” She waved her hand. “Halloween is a fun holiday. You get to dress up and act silly. What’s not to love?”

“You certainly found a winning costume.”

“Not quite? You’re the sexiest angel slash sex kitten I’ve ever seen. That,” he nodded and raked his gaze down her body, “works for me.” Everything about her so far worked for him. He could listen to her foggy voice put him in his place for quite a while. His cock thickened behind his zipper. For the first time in more than six months he forgot about his past and remembered what it felt like to offer himself to a woman. Now he just had to put those thoughts into words.

“Does it?” Her tone came out drolly.
Ty rubbed his sweaty palms on his jeans legs. His common sense dictated he go slow with her. Tell that to his libido.

“Come with me upstairs. We can talk and get to know each other.” He pointed to the fire escape. “We can take the back steps if you don’t want to fight the crowd. Or there’s the roof.” He closed his eyes. If she didn’t say it, he certainly thought it—he sounded slimy and coarse. “I’m sorry. I should keep my mouth closed.”

The smile blossomed and she laughed. “You sound a little smarmy, but yeah, I’d like to go talk. It’s been a while since I’ve had someone just want to converse.”

He offered his hand. “We’ll take the stairs.”

“Nah.” She shook her head. “Allow me.” She wrapped her arms around him and lifted the both of them off the ground. Within moments, they stood on the roof.

The grin faded and the blush faded from her cheeks. “Too much?”

He looked blankly around at his surroundings. They were on the roof. “I could be wrong, but we...”

“Flew up here? Yeah.” She stood before him and opened her wings. The feathers fluttered in the slight breeze. “Do you believe in things you can’t always see?”

“I’m a fallen angel.”
Posted by Wendi Zwaduk and Megan Slayer at 4:00 AM

Email ThisBlogThis!Share to TwitterShare to FacebookShare to Pinterest
Labels: Free Read, Halloween, I Wanna Be Loved By You, Short Stories