Roz Lee will be here tomorrow talking about her book, Still Taking Chances. I thought today I'd share the blurb, a snippet, and her vital stats! Come back tomorrow because she's giving away a copy of the book KINKY CUPCAKES to one randomly drawn commenter during the tour. The more you comment, the better your chances! 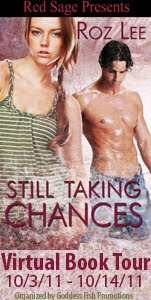 Here's the blurb to moisten your whistle: 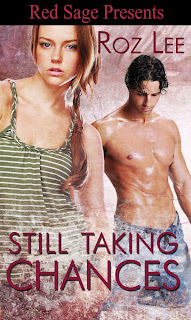 Here's the excerpt I promised:
Her eyes raked over him and he had the impression she was mentally undressing him as thoroughly as he’d undressed her in his mind. Something about her perusal made him want to squirm, but he held still. “Do you always wear black?”

“Yes, Mistress.” Yeah, he could play this game. She jumped off the high stool she’d been sitting on, and walked around the worktable. He followed her with his eyes, admiring the curve of her legs and the fine bones in her feet and ankles. She stopped and dug around in a large pink canvas bag that sat on the end of the flower-print covered sofa along the long wall opposite the door. His heart almost stopped
beating when she pulled out a serious looking set of leather handcuffs and a length of chain. Whoa there!

Where the hell did she get those? All the fight went out of him.

“Hold out your hands.”

Hud allowed her to fasten the cuffs around his wrists. She hooked them together with a short length of chain that looked like it came from a hardware store. If he twisted his hands around, he’d be able to unfasten the cuffs, he reasoned, as panic threatened to set in. He was momentarily distracted by the sweet curves of her ass as she walked away from him. She picked up a step stool and dropped it next to his feet. “Take your shoes off.”

He toed his shoes off and kicked them to the side. When he looked up from his task, Mary Beth was on the step stool, a head above him. In one hand, she held an S hook attached to a chain and pulley, the other she reached down to him. “Give me your hands.”

Hud swallowed hard and lifted his shackled hands. For the first time, he thought he might have underestimated Mary Beth Winters. She looped the chain at his wrists through the hook, and with a hand on the pulley chain, she jumped off the stool. Hud watched in dawning horror as she pulled the chain tight enough to make his shoulders burn and secured the pulley chain to a hook on the wall, well out of his reach even if he had his hands free. He cursed under his breath. How had he missed the chain pulley overhead? If he’d been on a mission, a mistake like that would mean he’d be dead.

Want to know more about Roz?

days she splits her time between their home in rural New Jersey, and Southern California, where her
husband works. Even though she’s lived on both coasts, her heart lies in between, in Texas. A Texan by
birth, she can trace her family back to the Republic of Texas. With roots that deep, she says, “You can’t
ever really leave.”

Roz and her husband have two grown daughters they couldn’t be more proud of, and are currently raising
a ten-year-old Labrador Retriever, Betty Boop, who isn’t aware of her canine heritage.

When Roz isn’t writing, she’s reading, or traipsing around the country on one adventure or another. No
trip is too small, no tourist trap too cheesy, and no road unworthy of traveling.

Linkedin: http://www.linkedin.com/pub/dolores-maroney-roz-lee/21/650/8a0
Posted by Wendi Zwaduk and Megan Slayer at 4:00 AM