What the? Wednesdays..A Couple New Reviews!

There for a while, it seemed like no matter what happened, I couldn't buy a review for my very first short story (first thing ever out for me) Learning How to Bend. I went through the normal range of emotions, too. First I was thrilled it was out, then introspective because I hadn't had any reviews. Then a little down in the dumps because of no feedback. Then I got one review. It was nice. Good, but I wanted more feedback. I don't know about you, but really, it seems like the more responses I get, the better my writing becomes. So, I waited. Seemed like forever, too. And then the review fairy dropped not one, but two reviews on my door step. Can you tell I was elated. (Oh, I don't know, the non-stop paragraph above wasn't a clue? Hee hee.)

Want to read them? Sure you do!

First one is Seriously Reviewed. I give them tons of credit because they are blunt and no-hold-barred. If they like it, they like it. If not, they tell you. In my case, I think she liked it.
Ms. Zwaduk has a smooth writing style. The words flow together and create vivid imagery and interesting characters. Learning How To Bend had all the components for a spicy erotic tale. Lust, betrayal, remorse, forgiveness. I enjoyed the story and I thought the technical points—the dialog, descriptions and such, were flawless. But there were moments I didn’t like the characters. Some aspects just didn’t seem to fit with the overall puzzle. We know both characters are hurting. They both feel betrayed and they both wish the circumstances of their relationship were better. All this was great. I felt their pain and confusion and also the longing for both what they’d lost and what they could still have if either would “learn how to bend”. Great title by the way, Ms. Zwaduk.

Made me smile. But I gotta tell ya, what made me smile wider, was the one from Whipped Cream Reviews. When I wrote Seth, he was tough to write. Why? He's emotionally drained. The guy has seen hell and lived to talk about it. But he's conflicted, too. He's not sure what to think about what he's seen. It's screwed him up. But you want to read the review, not my rambling.

When faced with soon-to-be-ex-husband Seth at her door Abby decides to up the ante and sleep with not only Seth but his best friend Nate.

The main characters were both amazing, and I loved the fact that both of them were able to get past their own perceptions and see the truth in regard to one another. Seth had allowed his own insecurities to wreak havoc in his mind and his marriage. They even led him to question their relationship. The good thing was that even if his mind was confused, his heart knew exactly where it belonged. In Abby’s case she had built a barrier in her heart because her marriage had run its course -- according to her husband. At least that is what she thought until he showed up at the door with every intention on proving to his wife that he had a moment of weakness but was willing to do what it took to prove to her he wanted their marriage for the long haul - even if that meant a ménage with Nate. Both could have easily turned their backs on each other. It shows real character that they didn’t.

The antagonistic conflict worked because it helped feed on Seth and Abby’s already existing insecurities. Kenny was able to find out what could destroy them and preyed on it perfectly. Luckily for our hero and heroine, their love was everlasting even when faced with the seemingly impossible situations.

We know that the media always tries to put a face with the soldiers; so does this story. This is something that is commendable. Anyone who reads this story can feel the passion from the author. Seth suffered the unimaginable while fighting in Iraq just like many of our real life soldiers. Part of what he saw leads to his questioning his marriage. This is a fictional character and I am not sure if the author based this story on a real person, but if so I would not be surprised. That is how real she has made Seth.

This story definitely had its share of hot sweaty sex, but what really made me fall in love with it was the relationship development and the emotions behind both of the characters. So if your heart strings need a little plucking this will be an excellent choice.

Now that I have your interest, want the vital stats for Learning How to Bend? Here's the blurb: 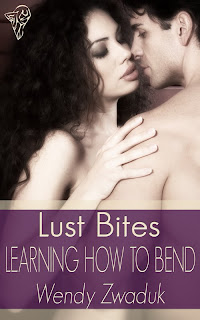 Oh, you wanted an excerpt? Sure!

“When can a fantasy be more than just a figment of the imagination?”

Abby Donovan pushed the sweat-soaked strands of hair off her forehead. “When the object of one’s affection is real.”

She plopped down on the couch. Pushing the furniture to the perimeter of the room drained her. Now she spoke to the walls, knowing her wayward husband couldn’t hear her ranting. “Is this what you wanted, Seth? Six years down the drain because your dick couldn’t stay in your pants?”

She glanced at her cell phone then at the photo propped against a nearby box. She, Seth and his best friend Nate grinned back at her. Maybe pizza would take her mind off her pain. Probably not, but with Nate as the delivery man, anything was possible. She bit her fingernail and dialled Besta Pizza Around’s number. A medium pie with extra mushrooms delivered by the sandy-haired hunk would make her feel a little better.

She checked the time on the clock on the microwave. Seven-oh-seven. Her husband’s best friend, Nate Waterston, was on delivery duty. Besta Pizza Around’s policy was ‘delivery in half an hour or you get another pizza free’. Calculating her wait time, she turned on her heel and headed to the bedroom. She had to hurry if she wanted to be dressed when she met her favourite pizza guy.

Abby stripped off her clothes in the stark bedroom and turned the stereo up to full volume, blasting the rock band, Slipknot, to drown out her turbulent thoughts.

She tugged off her socks. Seth smiled from a snapshot on the dresser. She balled the clothing and hurled them at the picture. “You son of a bitch! Why? Wasn’t I exciting enough? I loved you.” I still do…

Tears streamed down her cheeks. Her chest heaved. “Was it because I’m not a pilot?” She wadded her T-shirt and tossed it across the room. “You said our lovemaking was passionate and explosive!”

She stepped into the steaming hot shower. The water stung her tired muscles, but felt wonderful nonetheless, like indulgent pinpricks on her tender flesh. While she lathered her body, her mind wandered back to Seth. As much as she wanted to, she couldn’t get her soon-to-be ex-husband out of her mind.

Want your own copy? Go to Total-e-Bound or Amazon for a Kindle version.
Posted by Wendi Zwaduk and Megan Slayer at 4:00 AM

Oh this sounds interesting and thw writing seems good too!
Thanks for the rec!