Nana Malone stops by tomorrow with her new book, Game, Set, Match. Want to read the interview? Stop back tomorrow! And comment! There are prizes to be had and you don't want to miss out. Want to follow her tour? Click here!

Blurb? No problem!
Off the court, tennis star Jason Cartwright’s playboy image is taking a public beating. On the court, he’s down forty-love. A knee injury is shutting down his game, and the paparazzi are splashing his love life on every magazine. A comeback is in order, but the makeover he needs to save his faltering career is in the hands of the woman he loved and left fifteen years ago. 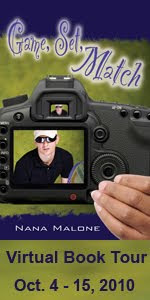 While single-mom, Izzy Connors, sees people for who they really are through the lens of her camera, even without it, she knows Jason isn’t the star he appears to be. Although his charm and good looks haven’t dimmed since he broke her heart, all she sees is his wasted talent and playboy lifestyle.

Can Izzy put the past behind her and help Jason get his game, and his image, back on track? Or will the click of her camera shatter his world as well as his heart?


Exceprt? Sure!
Dark glasses masked his eyes, but Izzy knew behind them she’d find intense heat able to strip her to the soul.

His tousled blond hair was just as she remembered it, a little unkempt, as if he hadn’t bothered with it. He was every bit the Hollywood playboy portrayed in the press. And that devil-may-care sexiness was going to be the death of her.

Before she could say anything else, his strong arms and a warm musky scent enveloped her. Involuntarily, her body stilled like an ice sculpture as her breasts came into contact with the hard planes of his chest. Unable to process the situation, she heard a faint clatter as his sunglasses fell to the floor. She squeezed her eyes shut and tried not to think of the last time she’d seen him, the last time he’d abandoned her for Sabrina. 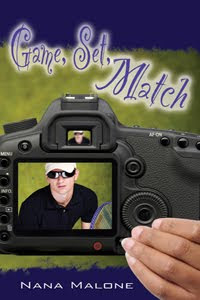 “Damn, Izzy, you look amazing.” He set her down, but kept hold of one of her hands. Whiskey eyes poured warm amber over every inch of her body. “How’ve you been?”

Behind Jason, his companion, with his rugged dark good looks and infectious smile, saved her from having to speak. Not that she could have. “Did I miss something, Jase? You two know each other?”

Jason’s smile flashed, making her want to do all manner of inappropriate things. Smash his head in with a frying pan? Strip him bare and see if he still looked as good as he promised? Launch a full TET offensive on him with her lips?

Not necessarily in that order.
Posted by Wendi Zwaduk and Megan Slayer at 4:00 AM