This post is part of a virtual book tour organized by Goddess Fish Promotions. Bobbi Smith will be awarding a $10 Amazon/BN GC to a randomly drawn winner via rafflecopter during the tour. Click on the tour banner to see the other stops on the tour. 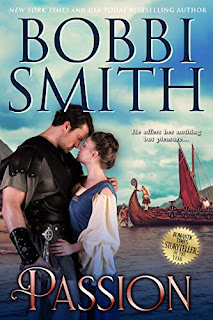 Unable to resist the desire running wild through their veins, Lady Dynna and the warrior from the north risk dishonor—and death—for their forbidden and dangerous love.

In this powerful tale from New York Times bestselling author Bobbi Smith, a woman and a man from worlds apart come together and make a bold escape for true passion.

To escape her forced marriage to the brute Prince Edmund, the young English Lady Dynna flees her father’s castle. From the hills of the Saxon coast she spies an approaching ship. Its blood-red sails can mean only one thing: a savage Viking attack.

On the ship is Brage, the magnificent Norse warrior they call Black Hawk, a savage man who battles for booty and takes captives. Yet on this day, Brage is betrayed, wounded and taken captive by his hated enemies the Saxons. On the misty shore, before he passes out, he beholds a woman of unsurpassed loveliness...

It did not surprise Dynna to find the captive awake as she made her way to him. His wounds were too grievous to give him rest, and she was determined to do what she could to ease his pain.

Brage was concentrating on her approach, watching the graceful way she moved. He was able to see just a hint of the womanly curves beneath the unadorned gown she wore. Had his men won the battle that day, he doubted that he would have sold her at the slave market.

The next moment Lord Edmund stepped out of the shadows, blocking her way.

Dynna gasped at the sight of him. “Sir Edmund…”

Brage was just as shocked by the nobleman’s unexpected appearance. He silently cursed the chains that held him as he watched her face the man he had come to despise.

“So I have taken you by surprise, my lady. That is good,” Sir Edmund said drunkenly as he leered at her. “Have you come here seeking my company to join the celebration of my bravery?”

“I…” she began nervously.

In that moment, Edmund saw the basket in her hand and realized her plan. He had been ready to seduce her with soft kisses. Now, he knew she had come only to help the Viking, and it infuriated him.

“Dare you help our prisoner when I told you to let him suffer? As my wife, you will learn my orders are to be obeyed!”

“I am not your wife yet!” she cried, trying to break free of his vicious hold.

I love the cover, it's so pretty!

I hope everyone enjoys Passion!

Do you spend a lot of time on research for the historical aspects of your stories?

The cover is amazing. I love the colors.

Bea - Re your question about research. Yes, research is very important to me and I'm a history nut, so it's truly so much fun to do. Thanks for asking. best, bobbi

I hope that you've enjoyed your book tour and I wash you the best of luck in all of your future endeavors. I am looking forward to reading you stories.