Book Blast ~ Sleeping with the Enemy by Jackie Barbosa

This post is part of a virtual book tour organized by Goddess Fish Promotions. Jackie Barbosa will be awarding a $20 Amazon or B/N GC to a randomly drawn winner via rafflecopter during the tour. Click on the tour banner to see the other stops on the tour. 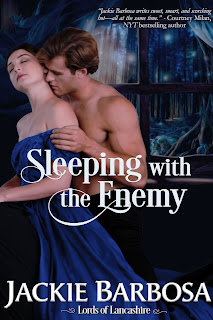 When Mrs. Laura Farnsworth discovers the blood-stained body of a man wearing the distinctive red coat of the British army, her first instinct is to let dead dogs lie. It has, after all, been just two days since the Battle of Plattsburgh, and the disposition of enemy corpses is hardly her purview. But then the man proves himself to be very much alive by grabbing her ankle and mumbling incoherently.

After almost twenty-five years in His Majesty’s service, Lieutenant Colonel Geoffrey Langston never expected to wake up in heaven, much less being tended by an angel. But when he regains consciousness in the presence of a beautiful, dark-haired woman and with no memory of how he came to be there, what else can he think? Except it’s rather odd for an angel to have an American accent.

As the long-widowed Laura nurses the wounded Geoffrey back to health, the attraction between them heats from a simmer to a boil. Bound by his oath to the British crown, Geoffrey should be working to find his way back to his regiment and from there, to England. Instead, he’s sleeping with the enemy…and thereby committing the crime of desertion if not treason. But then, who’s going to find out?

If only Geoffrey didn’t have a family back home who refuse to take “missing in action” for an answer.

As she added seasoning to the broth, she contemplated the question she had not dared ask herself before he awakened. What should they do with Lieutenant Colonel Langston now?

The obvious answer would be to take him to Fort Moreau as soon as he could reasonably be expected to tolerate the journey. There he would be held by the army as a prisoner until such time as the war ended, at which point he would likely be returned to the British in exchange for American prisoners. He would be treated well during his stay, insofar as any person denied his freedom could be said to be treated well, and eventually return home to his family in England. Clearly, it was the only reasonable—and possibly the only lawful—course of action.

Why, then, did even the idea fill her with misery and remorse? It wasn’t as if she knew anything about him save his name, military rank, and nationality.

And that he had beautiful eyes in a shockingly handsome face.

Dear God, am I really that shallow? That shameless?

Then again, perhaps after almost ten years alone, she had earned the right to be the slightest bit shallow, the tiniest bit shameless. 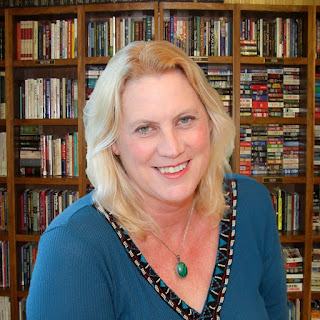 I can’t remember a time when I didn’t want to be a writer when I grew up, but there were plenty of times when I wasn’t sure I ever would be. As it turns out, it just took me about twenty years longer to grow up than I expected!

On the road to publication, I took a few detours, including a stint in academia (I hold an MA in Classics from the University of Chicago and was a recipient of a Mellon Fellowship in the Humanities) and many years as a technical writer/instructional designer for a data processing company. I still hold my day job, but my true vocation has always been writing fiction and romance in particular.

Buy Links for Sleeping with the Enemy

Hi, Jackie here. Thanks so much for hosting and please, if anyone has any questions, don't hesitate to ask. I'd be delighted to answer!