This post is part of a virtual book tour organized by Goddess Fish Promotions. Nancy Fraser will be awarding a $15 Amazon or Barnes and Noble GC to a randomly drawn winner via rafflecopter during the tour. Click on the tour banner to see the other stops on the tour. 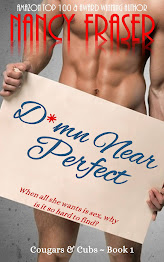 Beth Andrews has given up on ever finding a happily-ever-after. Still smarting from a bitter divorce, she’s decided the only thing she truly needs is sex.

Jonathan Tucker is perfectly satisfied with his bachelor lifestyle. He has a wonderful career, a kick-ass new condo, and any woman he wants. As often as he wants. At twenty-seven, he’s convinced he’s living life exactly as it should be.

Will the older, albeit sexy, ad executive and the handsome, talented artist both find there’s more to life than what they have now? Or, will they be satisfied with what the both claim to want—d*mn near perfect sex!

Beth lit the tapered candles and opened a bottle of expensive red wine so it could breathe. Harry would be there at any minute. Always prompt, the investment banker was finally going to get what he’d been hinting at on their last two dates.

Everything set, they’d have a quick dinner, a bit of serious foreplay, some hot sex and maybe—just maybe—she’d be asleep before her upstairs neighbor came home.

The security buzzer chimed Harry Patterson’s arrival. The hand-carved clock in the foyer cuckooed seven times. Checking her appearance in the hallway mirror, Beth pressed the release switch on the outside entrance and opened her apartment door in anticipation.

Moments later, the elevator door slid open and Harry, decked out as always in a two-thousand-dollar Armani suit, stepped into the hall. Beth could see another man standing just inside the elevator. The stranger raised his head and their gazes met. He smiled, a teasingly devilish grin, and then he winked at her. His gaze swept over her, leaving a trail of heat in its wake.

Harry, damn him, came forward, his approach blocking her line of vision, stealing from her a last glimpse of one of the most handsome men she’d ever seen, interrupting the wave of warmth flooding her body.

“Beth, darling. How have you been?” Harry asked, his voice filled with arrogant indifference.

Rather than voice her conscience’s desire for immediate action, she said instead, “I’m fine, Harry. How about you?”

“As good as can be expected, given the state of the market lately. Are those investments I recommended holding up for you?”

She could see shock and disappointment in the darkening of his gaze.

“Really, Beth, you’ve got to pay more attention. You’re not getting any younger you know. And, given what you lost in the divorce settlement, it’s imperative you start rebuilding your portfolio.”

He took a step closer and laid his palm against her cheek. His hands were soft, she noticed, probably softer than her own. She tried to imagine how they’d feel caressing her body, yet the image wouldn’t come. She closed her eyes and waited. Instead of conjuring up a picture of the two of them engaged in a steamy clinch, she saw the man in the elevator, his grin taunting her, his gaze assessing her.

Most men, she realized, would take the demure closing of her eyes, the subtle show of submission, as encouragement. Not Harry.

Rather than suggest skipping their meal altogether, he asked, “What’s for dinner?” 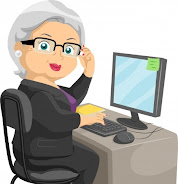 NANCY FRASER—Jumping Across Romance Genres with Gleeful Abandon—is an Amazon Top 100 and Award-Winning author who can’t seem to decide which romance genre suits her best. So, she writes them all.

Like most authors, Nancy began writing at an early age, usually on the walls and with crayons or, heaven forbid, permanent markers. Her love of writing often made her the English teacher’s pet which, of course, resulted in a whole lot of teasing. Still, it was worth it.

Published in multiple genres, Nancy currently writes for four publishers. She has published over thirty books in full-length, novella, and short format.

Thank you so much for hosting this stop on my tour. I'll check back later to answer any questions your readers may have for me.

Sounds so steamy! Can't wait to read it!

Love the cover! Thanks for the giveaway.

Funny cover! I bet the book is funny too since Nancy Fraser wrote it.