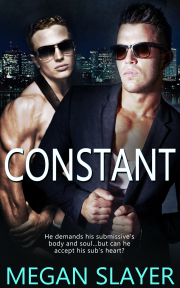 He demands his submissive’s body and soul…but can he accept his sub’s heart?

Roddy Green never planned to fall in love and certainly not with his Dom, but every time he goes into Darkness, a fetish club, he falls for Vegas all over again. Being in love isn’t the same as being loved in return. Vegas is there to do a job—not to build a romance. But what if the main constant in Roddy’s life is also the one person he can’t live without?

Andrew Vegas knows his job. He’s a Dom. But there is more than one side to him and he’s tired of keeping the other parts of him hidden. One man makes him feel safe and comfortable enough to open up—his pet, Roddy. But will Roddy, the producer of a local news broadcast, want to be with a man with secrets?

“You’re ready for this form of play.” He slapped Roddy hard on the ass with his bare hand. He slid his middle finger between Roddy’s ass cheeks. “Who does this belong to?”

“You, Sir,” Roddy answered. He held his reservations in check. Master Vegas had said the word play. Not love, not romance or desire. Just play. He shouldn’t have hinged his hopes on Master Vegas wanting him in a romantic way.

“You belong to me. Say it again.” Master Vegas punctuated his words with flat-handed spanks on Roddy’s butt. He tapped Roddy’s asshole on the last word.

“Good, pet.” Master Vegas dribbled chilly lube down the crack of Roddy’s butt. He continued tapping Roddy’s hole. “How much do you want me here?”

“I crave you, Sir.” At least he’d been honest. He pressed his face into the warm leather. “Please, Sir? Fuck me.” He wanted his Sir in his ass right now. Needed him. Couldn’t wait another minute.

“You expect a lot.” Master Vegas caressed his middle finger over Roddy’s hole, then eased inside. He pushed past the tight ring of muscle until he buried himself two knuckles deep.

Holy shit. Roddy wanted to thrust. Every instinct told him to ride Master Vegas’ middle finger. Instead, he held back. He wasn’t in control.

“Good, pet. You’re withholding for me. Pleasing me.”