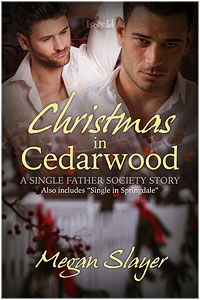 Christmas in Cedarwood by Megan Slayer

with Bonus Story ~ Single in Springdale

Christmas in Cedarwood
Two men, one kid, and the frayed nerves that come with the holidays… Can they make it through to Christmas without a blow-up?

Colt Harrison knew when he met Ashley Willis that he’d found the one man for him. He loves Ashley’s son, Wyatt, as if he were his own. But the stress of living together, compounded with buying a home and adopting pets, has worn him down…not to mention the aggravation that comes with the diner he owns. He wants to make Christmas special for his family, but how can they have a great holiday when Colt’s never home?

Ashley’s got a two-week vacation from his job at the elementary school teaching art. All he wants is time with Colt and Wyatt. He loves Colt, but not the long hours spent at the diner, especially around the holidays. Can he be honest about what he wants from Colt and keep the man he loves?

Anything is possible if they embrace the magic of Christmas.
Bonus story included!

Can two lonely hearts find their way to each other despite the odds?

Dr. Isaac McLean knows he’s not supposed to lust after a patient, but there’s something about Len Connor that he can’t forget. His laugh? His strong will? His sexy body. But will Len want to be with his former doctor?

Len Connor wasn’t looking to get back into the dating scene, but a chance meeting with Isaac at the animal shelter has him thinking otherwise. Isaac is sweet, funny and oh, so handsome. But he’s also at least twenty years younger than Len. Will this cougar get his cub and have a happy ending? Or will the relationship fall apart before it gets started?

“I hear bells,” Wyatt shouted. “Here comes the horses!”
Colton made quick work of cutting down the third tree. Ashley returned with Tyus’s dad. “I got help,” Ashley said. “He’s got tags, too.”
Colton dragged the third tree to the path and with help, hefted the two bigger trees onto the back of the wagon. He plunked the third one on top, then followed Ashley up the steps. He sagged onto the seat and draped his arm around Ashley. Wyatt bounced up to where Tyus sat.
“You didn’t have to do that.” Ashley shook his head, then kissed Colt’s cheek. “I love it, though. We’ll have to buy extra ornaments. We don’t have enough.” He snuggled up to Colt. “Oh well.”
Colt rode the rest of the way to the barn in silence. He had so many other things he wanted to say to Ashley, but not yet. He wanted them to be alone. Wyatt might be up with his friend near the front of the wagon, but that didn’t mean he wasn’t listening.  The wagon stopped and pitched Ashley and Colt forward a bit. Colt stood first, then tugged Ashley to his feet. “Go ahead and pay for them. Tell the girl I paid for the one with the bows. She’ll understand. I’ll tie them onto the cars.”
Wyatt jumped off the wagon. “Can we get a pizza?”
“Sounds good.” Colt nodded. “Why don’t you order a couple on-line and pick them up on the way home.” He squeezed Ashley’s ass. “We’ll eat while these dry out in the garage, then we can decorate when we’re done.” He kept Ashley closer and dropped his voice to a whisper. “Once we’re in bed, I’ll decorate you.”
Ashley shivered. “Yes.”
He kissed his boyfriend and sighed. God, he loved this man.

Posted by Wendi Zwaduk and Megan Slayer at 2:30 AM