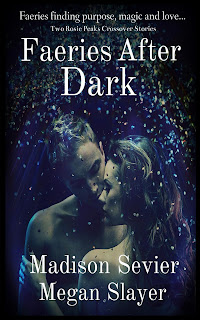 A faerie on the run with a stolen bear. An attraction neither can deny. Magic is the key when these two hearts collide. Fiona Blake has always been the faerie who’s done the right thing. She's avoided trouble and love her entire life. Now, she's unemployed and on the run--with a stolen bear. By using her magic, she's unbalanced the laws of nature and Fiona is in deep scat. She must fix things before she loses her powers and her heart to a sexy stranger who might get her locked up in faerie prison.

Kash Bruin needed a break from his overbearing, matchmaking father. He never imagined he'd wake up in a cage, naked and kidnapped by a crazy, violet-eyed, beautiful woman who believes she's a faerie. Can a spark of magic bring these two creatures from separate world's together? Or will the truth be too much to bear and tear them apart fur-ever?

What’s a love faerie supposed to do without her magic?

Cordelia likes to play fast and loose with the rules. So she’s made a few mistakes with magic along the way? No one got hurt…right? The blue-haired faerie, prone to the occasional blue language and dirty jokes, loses her right to create magic after one goof-up too many. But she’s about to find redemption in the form of a merman named Henry and a human named Jinx. Fix them up and she’ll get her right to create magic back. There’s only one problem…Liam.

Liam could be the right man to help Cordelia rise above her troubles…but first she’s got to make him believe she exists. Not impossible, right?

She’d have to face the guy some time. She whipped around and collided with a solid wall of male muscle. He smelled like leather and stood at least eight inches taller than her. She splayed her hands on his chest to steady herself, then backed up. “Sorry.” 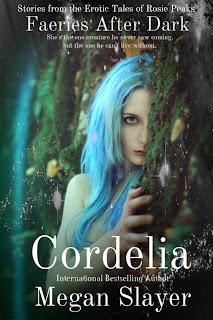 “I scared you?”
She met his gaze. Holy fuck. He had blue eyes. “Jinx?”“That’s my brother.” He smiled. “Are you okay? You look lost and a little confused.”A little? “You’re fucking serious? You’re not Jinx?” She swept her gaze over him. Christ. She’d cream her shorts at this rate. He had muscle in all the right places, a chiseled jaw, reddish blond hair and blue eyes. When he smiled, his dimple showed. He smelled good and when he spoke, shivers ran the length of her spine. And here she was with a wet tank top and hard nipples. She was so fucked.“I’m serious.” He laughed and offered his hand. “Jinx—er—my brother, Jeremy, tends to be here. He paints. Why are you looking for him? It’s too late for him to paint tonight.”“Oh. Right.” God. She sounded stupid. “I’ll stop talking now.”“You don’t have to.” He slipped her hand into his and tugged her to the closest bench. “Have a seat, catch your breath and let’s talk. You look flustered. You can’t possibly be a hitwoman or out to find him because of a secret baby.”“Why not?” Being a hitwoman wasn’t on her radar, but anything was possible.“Despite your foul mouth, you’re too sweet.” He nodded to the bench. “Sit. Tell me your name and what’s going on.”She plopped onto the bench and willed her chest to cooperate. She pressed her knees together. Christ, the heat in her body would overwhelm her sooner than later. She wanted to touch him again and feel that sizzle. “My name is Cory…Cordelia.” She shook hands with him. Damn. Firm grip. What would it feel like to have those hands around her waist during sex? Probably heaven… Shit. She had to focus. “I’m actually trying to find Jinx or Jeremy, as you called him, for a friend of mine. A mutual friend told me to get them in contact and put in a good word.” “Is either friend a guy?”
“Yeah. One of them is.” She slid her gaze to him. “Why? Didn’t you know he’s gay?”“I knew.”
“Before we go any farther, what’s your name?” Call her nosy, but she wanted to address him properly when she asked him to bed later.“Liam. It’s short for William. William Darling.” He shook her hand again. “It’s a pleasure to meet you, Cordelia.”