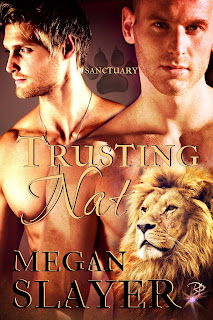 The key to his humanity is finding his place in the pride.

Sydney came to Sanctuary believing he wasn’t anything other than the runt of the litter. Strengths? According to the others, he had none. But one special shifter seems to think otherwise—Nat. To bring out the brave side of Syd, he’ll need to trust.

Nat has always known he’s a beta. No question. He’s drawn to Syd and wants to find out if their existence at the Sanctuary should be more than platonic. When he and Syd are called upon to bring back more lions from the petting zoo, he not only sees Syd’s true potential, but realizes his true feelings for the fellow shifter.

Can these two shifters forge an alliance and grow together or will their heated experiments between the sheets be the end for them both?

Out now from Resplendence Publishing:

And Now, an excerpt!
Copyright © 2015, Megan Slayer
“I’m not happy about this, but I’ll leave you alone. Get your rest, and I’ll check on you later, okay?” Nat trailed his fingers down Syd’s chest. “You worry me.”
“Sorry,” Syd mumbled. He hadn’t meant to be a bother. He waited for the other lion shifter to leave the room then he flopped onto the bed. He unzipped and eased his still rock-hard dick from his jeans. Jacking off wouldn’t make him feel better. Using his dildo wouldn’t work, either. He needed the touch of the man he crushed on to make everything level again. Except, he’d just caused Nat to leave him alone.
Syd wrapped his fingers around his cock and stroked. Just like downstairs, he wouldn’t need much in order to come. He stretched one leg out on the bed and draped the other leg over the side. He planted his foot on the floor.
As he jerked himself off, he pictured Nat with him. Nat knelt on the bed between Syd’s knees. Fire blazed in his eyes and his cheeks were stained red. His blond hair stuck up in odd tangles.
“Love watching you do that,” Nat said in the fantasy. “It’s sexy when you jerk off.”
“Love when you watch me,” Syd murmured. He closed his eyes and arched his back. With one hand on his dick, he used his other hand to stroke his balls. The fever in his veins engulfed him. He couldn’t think straight. The only thing that mattered was finding release. He puffed and grunted.
“I want to see you come. All over me, Syd. Decorate me.” Nat, now nude, perched between Syd’s knees. He plucked his nipple and licked his lips. “Come on.”
Syd nodded.  His breaths turned ragged, and his mind fuzzed. The orgasm built low in his body and spread throughout his groin. He parted his lips. “Nat. Fucking hell, I’m coming.” Something deep within him snapped, and he sagged against the bed. A rope of cum stretched across his belly, staining his shirt. The warmth seeped through to his skin. He panted, and when he opened his eyes, the room spun. Damn.
“Syd?” Nat raced into the bedroom and stopped. “I thought I heard my name…” He didn’t finish his sentence.


Syd tipped his head. He knew Nat was in the room, but anything he wanted to say was gone. He’d been found out. Well, shit.
Posted by Wendi Zwaduk and Megan Slayer at 12:00 AM