My dear friend, Kacey Hammell, has a new book out and I think you're all going to like it. Check it out! 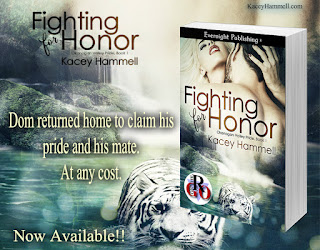 There's only one rightful Alpha, and he's back to claim his pride and his mate…

As the rightful Alpha of a unique pride of panthers, originally founded by his father, Dominic Stone followed his inherent solitary path to find peace and grieve the untimely demise of his dad. Five years later, he returns home ready to take his place, settle old debts and claim the one woman he’s always wanted as his. 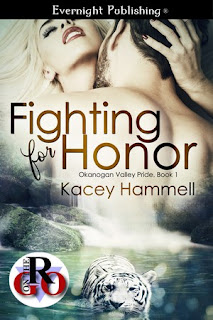 Reviews:
Fighting for Honor may be a first for Kacey Hammell in a new genre, but within the pages, Kacey's delectable story telling is on full display…a quick read that will leave you on the edge of your seat…Whether or not you’re a fan of shifter book won't matter, because you'll be too engrossed in this riveting story.” 5 Stars from Liz, Goodreads

Thanks so much for having us Wendi!