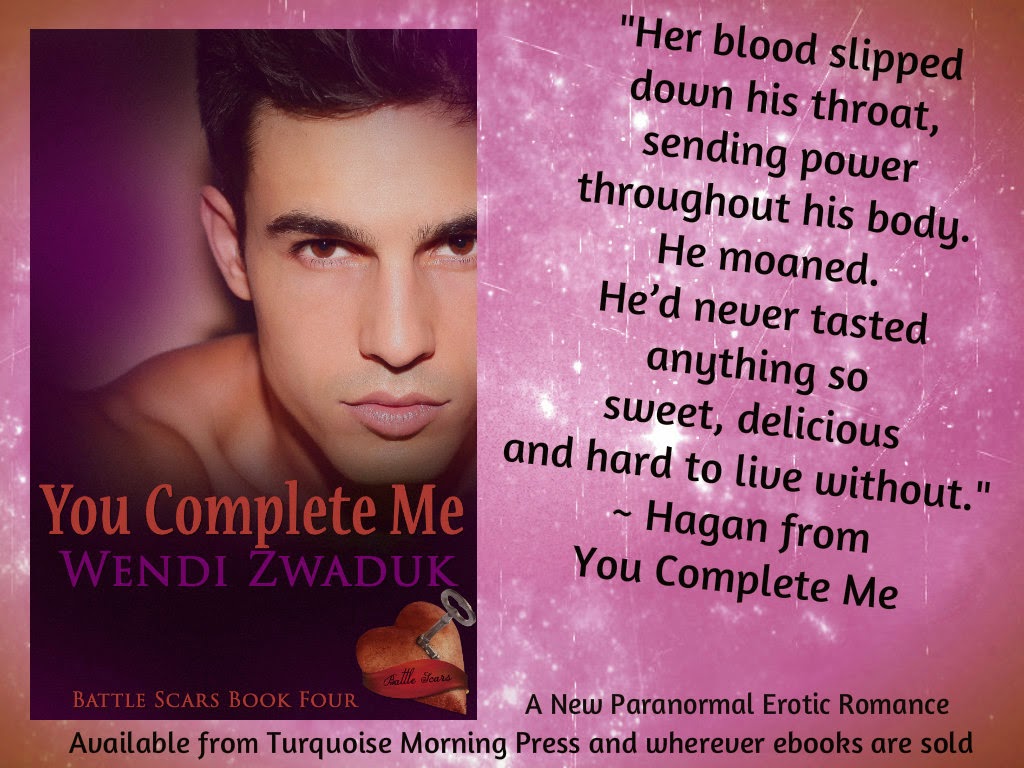 YOU COMPLETE ME by Wendi Zwaduk
I’ve got your back, if you’re willing to trust your enemy.
Hagan Dean thought he was helping his friend. He was playing the role of savior…except he ended up left for dead in the sunshine. Vampires and sunshine don’t mix. Even worse? A Hunter—one of the sexiest women he’s laid eyes on—is ready to kill him. He’s got a lot to survive for and the odds are stacked against him, but he’s a fighter. Will the Hunter let him live another night? Or is this vampire destined to fry into a pile of soot?
Emily Cross is a born Hunter. Her life’s work is to keep the balance between the Supers and the Supers who have stepped out of line. She’s never been keen on the Rogues taking over the Hunters. She doesn’t want to kill all the Supers…she is one! When she finds a nearly charred vampire in the woods during one of the hunts, her thoughts turn from killing to keeping him alive.
Will these two opposites come together to find common ground in order to help end the war? Or will the passion crackling between them tear their worlds apart?
Release: January 20, 2015
Category: Fiction > Romance > Erotic > Paranormal (vampire, werewolf)
Series: Battle Scars, Book 4
Heat Level: Erotic Romance/Erotica
ISBN: 978-1-62237-351-2
Ebook Price: $2.99
Digital Download: EPUB, MOBI, LIT, PDF


He was dead. Had to be. Hagan stared into the darkness surrounding him. He’d been out in the sunshine for too long—nasty business for a vampire. Sunlight ensured death. He shouldn’t have been in the daylight at all. He should’ve stayed in the cave…but he had to keep Ava alive. If she didn’t make it, then no one would know the true extent of what Maslow had done. Someone had to change the tide of the war.

He wondered if she’d made it out. He hadn’t seen her when he went back to the cave. He’d damn near burned to a crisp in the sun. His hands and arms were practically black and peeling. So much for trying to help. But when had he crawled back into the cave? The last he knew, he was still outside in the sunshine.

Hagan groaned. So this is what death felt like…a charred steak left in blackness. It wasn’t as if he was going to head to heaven. Nope. Vampires weren’t on par with angels. He’d be lucky if he received passage to hell. At least there, he’d see his other vampire friends. He hadn’t done a thing to earn him an audience with the Sources.

“Do you know where you are?” a thin male voice asked.

He froze, although he wasn’t sure if movement was possible in the vast vacuum of darkness.

Hagan still wasn’t sure who was talking or where to sit. He glanced around at nothingness. As he looked, the darkness faded and he noticed an outcropping of rocks. The stones arranged almost like a chair. Huh. He’d seen rocks like that before, but only one place and it was while he’d passed through… He’d heard about stones and darkness where the Sources held court, but surely, they weren’t talking to him. Was he in the presence of the oldest beings in the world? The Sources?

“Yes, Vampire. You are where you believe yourself to be.” A light appeared, illuminating a figure clad in a crimson robe. Dust swirled in the light, obscuring the individual’s face.

“Sir.” Hagan dropped to his knees and bowed his head. He was really in the cave of the Sources. No freaking way. The Sources only called the most important Supers into their presence. He wasn’t important.
“Speak the words on your mind,” the male Source said.

“I don’t know why I’m here.” Hagan didn’t look up. “I should be dead. I was in the sunshine. Did I save Ava? Is she my mate? What’s going on with the war?” Good Goddess, he had a lot of word vomit in his head.

“Ah. The vampire of many questions.”

“Will you tell me?” He had no right to be so demanding, but they had told him to speak.

“Your journey is not at the end.”

The Source talked in so many stupid riddles. Hagan bit back a growl. “Then what am I to do?”

“How?” he blurted. He didn’t even know where he was going or how he was supposed to get there.

“Trust your heart and your calling. The war is still not won and can be lost on good intentions.”

His calling? Lost on good intentions? Why in the name of the Goddess did they have to be so cryptic? “I’m confused.” He couldn’t see much more than the Source’s robe. They could reveal themselves to him. It wasn’t as if he’d live to tell anyone about what he’d seen. He hated not knowing what was going on or seeing the face of the person talking to him.

“As expected, you are confused. Your journey is long and hard. You will return to the Earth. Find your mate and continue on your way. Trust.” The being snapped his fingers. “Go.”

The Source would have to sound like a mystical sci-fi character from the movies—all enigmatic and bizarre.
Posted by Wendi Zwaduk and Megan Slayer at 7:32 PM