It's the last snog of Blissemas and I've got a present for you! An Ebook copy of my first Christmas story as Megan Slayer, titled Wrapped Around, up for grabs to one lucky commenter. Could that commenter be you? I need your comment, email and name and you're in the hat! International commenters welcome! 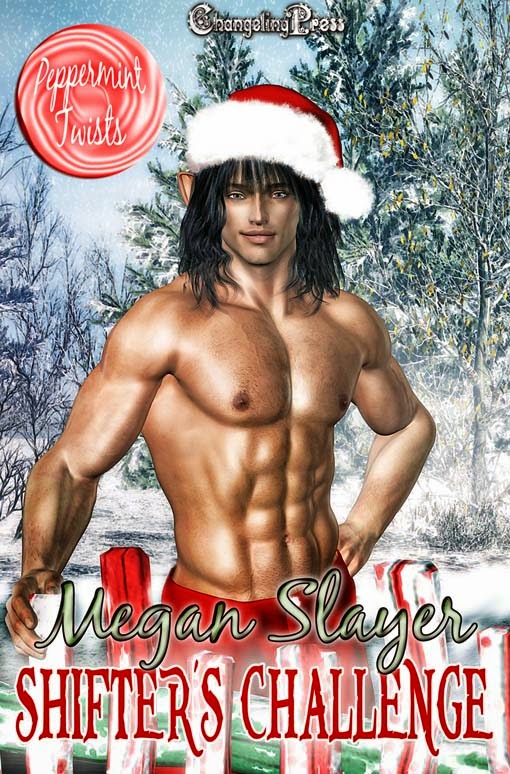 Time to see what magic Christmas has in store for Steve, a black cat shifter, and Landon the Elf…

Steve Moore, a black cat shifter, breaks into the North Pole Christmas party in his cat form. Easy enough. No one imagines a black cat would be out of place in a warm building in the middle of the winter. But Steve’s not there to sample the cupcakes or eggnog. No, he’s there to find the one Elf who makes his heart race -- Landon. Is Landon still interested in the shifter? They only spent one night together. Things could fall apart once they find each other again, but Steve’s betting the Elf is craving him, too.
Time to see what magic Christmas has in store.
Available soon :

And now for that snog!
Copyright ©2014 Megan Slayer

“Oh… That’s against the rules?”
“Big time.” Landon chuckled. “You have no idea.”
“Even for love?” Steve curled his fingers under Landon’s chin, moving the Elf’s gaze. “I’m missing something. Talk to me.”
Landon rubbed his cheek against Steve’s hand. “I missed you, too.” He groaned. “I wanted to call, email or something to find you, but we hadn’t exactly gotten to the point of exchanging so much personal information.”
“I know.” He wished they’d spent some of their time talking, rather than just fucking… but the sex had been worth the hassle.
“I stayed out longer than my pass. I loved every moment of our time together, but I had to go home. Santa’s got special Elves who track us. They found me and brought me home.” Landon stared into Steve’s eyes. “This is nuts. An Elf and a man who shifts into a cat. Our being together shouldn’t work, but it does. But think about it. How was I supposed to explain that to Santa?”
“True.” Most of the humans didn’t even believe Steve could exist -- a man who shifted into a cat. The very idea was crazy. If they found out Elves truly existed… all hell would break loose. Still, he didn’t want to give up on Landon. They’d figure something out.
“I mean, how was I supposed to know if what we had was love? Horny good times? Yeah. Something I wanted to do over and over? You bet your ass. But love? Too soon to tell.” Landon shook his head. “I like finite things. I need to know where I stand and what’s going to happen. With you… everything seems so up in the air.”
At least the crazy, mixed-up feeling was mutual. Steve pulled Landon onto his lap and draped his arms around the Elf. “Then why don’t we see what this is between us and how we can build on it or give it up? I’m all for round two and three. Can’t know who we need unless we stoke this fire a whole lot more.”
* * *
Landon wobbled on Steve’s strong thighs. He’d expected Steve to push him away, not come on to him. Landon’s entire body warmed, and his cock pushed against the velvet of his pants. He rocked forward, rubbing his bulge on the tent hiding behind the robe. Between the plug in his butt and the cock rubbing against his own, his entire body sizzled. Sweet peppermint balls, they felt so good together.
“Damn,” Steve said, drawing the word out. He nibbled Landon’s bottom lip. “Dangerous little Elf.”
“I like it.” Landon groaned. A thought occurred to him. He’d been given a present -- the best ever -- and he wanted to share his happiness. “I owe you a present. Christmas is meant to be shared.” He leaned forward and kissed Steve once more. The taste of Steve’s mouth on his affected him like wine. Tingles shot through his body as he splayed his hands on Steve’s bare chest. He flicked Steve’s nipples, loving the way the slender man moaned because of his touch.
“God, I love that.” Steve swatted Landon’s ass. “Naughty Elf.”

Love it! I want that naughty elf! lol Loved the excerpt! Cant wait to check this one out and see what happens next! Thank you! Happy holidays!

This sounds like a hot yummy book.
sstrode at scrtc dot com