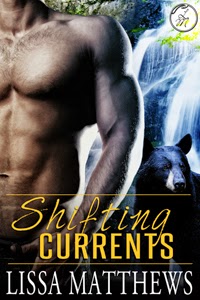 Blurb:
Blake doesn’t want a mate. No way. No how. And he certainly doesn’t want her camping on his land, floating down his stretch of river, or looking like she belongs in his bed. But that's exactly what he gets when he happens upon a curvy woman with shades of sunset hair named Leah.
She's on vacation and isn’t looking for any complications, especially in the form of a shifter or the possessive MINE signal he gives off.
So, what are two bears to do when they've convinced themselves they don't want, much less need anyone else?  They give in to the pull and mate, of course, but in sex only. No life commitment. No cubs. No changing the way they live: Separate and independent of each other.
Except when she leaves his mountain, Blake can't get her off his mind and Leah can't stop craving his particular brand of gruffness. Now, the one thing neither wanted, has come full circle, and is ready to bite them both.

Snippet:
He knew pain and loss, and he didn’t want anything to do with it ever again. A woman would only complicate his uncomplicated life. “I’ll just stay away from her,” he declared to the four walls. “I’ve done a good job of it so far. I can just keep doing so until she leaves the area.”
You could kick her out. She is trespassing.
Blake couldn’t argue with the thought. She was camping on private property. But, he reasoned, she was set up and he wouldn’t make her move. Especially since it would put him in the position of having to talk to her. No, he’d let her stay and hope that she left real soon.
Feeling satisfied with himself and his decision, Blake made for the kitchen and the Mason jar of iced coffee in the fridge. If summers were good for anything, it was iced coffee. He drank it black, undiluted but for a few ice cubes and a slight sweetness.
He stepped onto the deck at the back of the house, and took a deep breath. The heat wasn’t so bad with something cold coating his throat and cooling him from the inside out. But it was still oppressive. He turned to re-enter the cabin, but caught the scent before he could turn his head. She was near. To the northeast and getting closer.
Blake debated with himself. Should he get closer? Should he get a look at her? His body screamed that yes, he should. His brain screamed obscenities at him for even considering it.
Her scent was stronger now. “Man, this is such a bad idea,” he whispered to no one even as he set the jar down and crept off the deck to the forest floor. Lucky for him, for a six foot five guy, he could be surprisingly stealthy.
He wound his way through the brush toward the water, careful to keep out of sight. A stand of trees and low-lying bushes allowed him to stay out of view. He crouched to his knees and waited.
He didn’t have to wait long. Her inner tube rounded the bend in the river several seconds later and Blake had to bite down on his tongue to keep a groan at bay. His soul growled “Mine” and his brain knew they were all goners.

About Lissa:
Born and raised in the South and currently living in North Carolina, talented, multi-published author, Lissa Matthews, has many loves in her life: Family, friends, NASCAR, football, music of all kinds, cooking, and penning stories filled with feisty, sassy heroines and naughty heros, and last, but certainly not least, coffee.
Please visit her Website for the most up to date information on her books and sign up for her Newsletter to be informed of new releases, sales, and special subscriber information.