Smut Alfresco is out Now!! 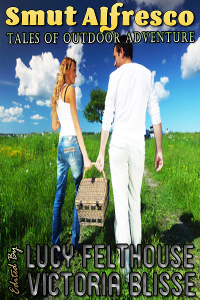 From the dramatic gritstone escarpments of Derbyshire’s Peak District, to a quiet caravan site in deepest Wales, Smut Alfresco has it all. Whatever your interpretation of frisky outdoor fun, there’s something nestling between the covers for you.

Other links added here as they become available: http://lucyfelthouse.co.uk/published-works/smut-
alfresco/

Violet slammed down the lid of her laptop with far more force than was necessary. She flinched,
thinking perhaps she might have cracked the screen or broken one of the machine’s internal
components. Then she shrugged, realising she didn’t care if she had. It was her work’s computer,
after all, not hers. If it was fucked, they’d have to replace it. And it would serve them right, too.
Bastards.

The reason she was pissed off was the fact she was in work at all. It was Saturday, and the previous
afternoon her useless boss had dumped a project on her, stating it had to be finished by Monday,
no matter how long it took. He’d then added that he was going away for the weekend, meaning it
was all down to her. The selfish, disorganised wanker. It wouldn’t be so bad, but she hadn’t had a
pay rise for two years, and when she went above and beyond for her job, she didn’t get so much as a
thank you, let alone be paid any overtime. It wasn’t the first time something like this had happened,

Well, fuck them. She wasn’t going to be a doormat—or her boss’ scapegoat—any more. Let them try
and sack her—she wasn’t doing anything remotely wrong, and they couldn’t make her working life
any more hellish than it already was.

She stood up sharply, sending her swivel chair careening backwards across the room until it hit the
wall. She shrugged again, she still didn’t care. Let it chip the fucking paintwork, or a bust a hole in
the plasterboard. No one else was there, so nobody could prove or disprove that it had been an
accident.

Pausing to switch the lights off—she was pissed off at her employers, not the environment—she
left the offices, setting the alarm before closing the door behind her. Stuffing her access swipe card
into her handbag, she heaved a sigh of relief. There would probably be hell to pay for her stunt on
Monday, but she’d worry about that then. Right now, she was just desperate to get out. Into the
countryside, or, given she was in central London, to a green space, at the very least.

From where she worked, Green Park was probably the closest, but she figured Hyde Park and
Kensington Gardens were bigger, so she’d be more likely to find a secluded spot where she could
just be by herself. The last thing she needed now was to have to deal with other people.


“That,” he inched the Jeep forward, “is our lot number.” Torin drove down the winding path to a secluded area of the campground. No other campers or vehicles were visible. He pulled into a gravel path next to a log cabin. Bright orange mums and daisies blossomed in front of the weathered grey building. “There. We’re off the grid. Kind of.” He whipped out a set of keys. “These are the keys to our private hideaway. No one will bother us because no one knows we’re here. We’ve got a dock and a whole open field down the hill a little ways. Plus, I have a surprise for you.”

Zoe rolled her eyes. They were standing on front of a wooden cottage in the middle of a deserted campground. What possible surprises could he have up his sleeve?

Torin slipped out of the vehicle and walked out of her line of sight. Within moments, he returned with a huge bouquet of roses. “These are for you, my love.”

“Thank you.” She buried her face in the sweet crimson blossoms. “You know how much I love these.” Zoe wrapped her free arm around his waist. “Question. How do you know we won’t be interrupted? We’ve had the paparazzi on our tails for the last six  months.”

She opened her mouth to protest, but he silenced her with a kiss. Zoe melted into his touch, threading her arms around his neck. His tongue tangled with hers. Torin hoisted her off the packed earth, then carried her into the cabin. The door slapped on the wall and His growl ripped through her thoughts. “Fuck. Can’t wait.”

His thrusts turned feral and his panting filled the air. He nudged her higher up on the mattress, then rested on his knees and hand. Each thrust rocked her to her core. Torin kept his gaze fixed on her, then released his grasp on her breast.

Until he gave her the command, she hadn’t realised she’d been holding in her climax. Zoe arched her back and crossed her ankles at the small of his back. She dug her nails into his shoulders, despite his T-shirt, and closed her eyes. The tingles turned into a full blown tidal wave of lust and desire in her veins. She cried out and her entire body tensed.