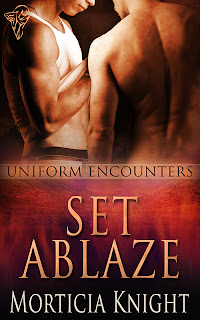 I want to thank Wendi for allowing me to be at her blog today. I’ve had an awesome week. My new MM firefighter release, Set Ablaze, made the Bestseller list at All Romance today, so I’m very excited about that. It is also doing great at Amazon, and it just came out Monday. The numbers are wonderful, but that isn’t the only reason it makes me happy. This particular release means a lot to me.

My very best friend in the whole universe, and the person I live with, is a gay man. We’ve lived together for almost seven years, and I’ve experienced many of his ups and downs, know his past intimately, and we’ve shared our own trials and tribulations. When I decided to start writing GLBT themed romance, he was thrilled. He has been here with me from the beginning, and is a fantastic support system, as well as a source that I can turn to for accuracy. His experiences, as well as other experiences in my life, helped inform the intense emotional moments in this story.

I won’t get super intense with you today though, so I’ve chosen a racier moment from the book to share. Because love and romance makes all of the trials in life worth it, right? Set Ablaze is set in Mesa, Arizona, and tells the story of Tom, a young firefighter starting over in a new town, and Eric, the older Fire Chief coming out after twenty years of marriage. This is the scene where Tom accidentally walks in on Eric and catches him with his…well I’ll let you read and find out.

It was ten p.m. when he arrived at the station, and his pulse quickened a little when he saw the light still on in the chief’s office as he pulled in the driveway. If he kept driving past the garage where the engines were kept and parked by the sleeping quarters, the office would be completely obscured from any of the guys on shift—even if they went outside for a smoke. Tom noticed a tan Ford Bronco parked at the end where the office was. That must be the chief’s ride. Exactly what he would have pictured him in.
Tom was about to continue pulling all the way in, when he thought of something. Maybe he could just drop in and thank Eric again for the opportunity. Who knew when else he might be able to see him without anyone else around?
Stupid. It’s late at night, I’m sure he doesn’t want to be bothered.
Tom sat there letting the car idle while he wrestled with his gut instinct—the one that was telling him it was a bad idea. Then a wonderful realisation hit him—he’d promised the chief he would drop off a copy of his most recent physical as he was stuttering and bumbling out of his office earlier. Tom put the car in park, and jumped out. He opened the back lift gate, and rummaged around for the paper he’d brought with him.
Yeah, it was still a little weird, but he could at least say that he’d seen the light on, and thought it would be easiest for him to drop it off on his way in to his shift. His heart thumping in his chest, Tom grabbed the document, parked his car properly, and started to walk towards the office door, surprised to note that his legs actually felt a little shaky.
I must be more tired than I realised, that’s all.
He reached the door to the building, and it was unlocked, so he went ahead and pulled it open. The waiting area and Keri’s office were completely dark, but there was a sliver of light coming from the partially opened door to the chief’s office. He heard a groan.
Oh shit, is he okay?
Tom ran forward and was about to burst into the office when he heard another voice, a younger male one.
“Oh yeah, you like that, don’t you, Mr Anderson? You like it when I squeeze your cock and play with the tip like that, don’t you? You see—you need me. I’m going to show you how much more you need me when I lick your balls and then suck the juice right out of your fucking huge cock. Here I come, baby…”
Tom heard an even louder groan, and Chief Anderson’s voice, “Oh God, Brad, I can’t believe how good that feels. But I…”
“You want me to stop? Is that it? Okay, if you don’t need my tongue doing this to you…”
Tom heard a whimper.
“Or this…”
What is he doing? What is he doing?
Tom was bombarded with a flurry of emotions—surprise, lust, jealousy, curiosity. He didn’t know what to do. God, the chief wasn’t straight after all. But if Tom got caught… He was so curious, but he didn’t dare creep any farther. He should just leave that very second.
The chief moaned some more, and Tom could tell the man was nearing climax. Christ, if he didn’t get out of there soon, he would be too. He’d need to get his boner to go down before he could even head over to start work. What a night! Tom turned around to leave, and bumped his leg against the magazine table. Without thinking, he cried out.
“Who’s there?”


Available for a limited time for only .99 cents: