Learning How to Bend - Snog Style!

Thought for my snog today, I'd use a blast from the past. My first release, Learning How to Bend. 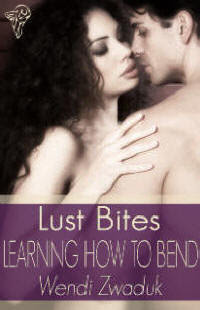 And here's the snog!
Hell, she’d yearned to touch Nate from the day she met him at Seth’s college graduation. Starting with his big feet and sculpted calves to his bronzed shoulders and piercing green eyes, she’d felt drawn like a moth to a flame. But being a happily married woman meant no contact with another man, including her husband’s friend. With both men involved, she could be a vixen and explore her limits. Seth always did mention he’d love to try a ménage a trois, especially with Nate. Why not now?
She handed the six-foot tall, sandy-haired hunk the bills. “Here you are.” Knowing Seth watched from behind, Abby wrapped her arms around Nate’s muscle-corded neck. “And this is your tip.” She pressed her lips to his.
“Are you certain Seth’s cool with it? He’s squirming.” Nate stepped back and stole a glance at Seth. His voice wavered a bit. “I know we talked about it, man, but that was before you married Abby. I gotta tell ya, I’m in.”
Abby looked at Seth. Her brows rose a fraction of an inch. Seth and Nate discussed her, or rather sex with her. She should’ve felt insulted, but instead a burst of raw desire and longing rushed straight between her thighs. Her lips parted. Was she in accord with the situation? She wanted Nate, yes, but she also needed Seth as much as she had the first time they made love. “What do you think, Seth?”
The fire of possession burned in Seth’s eyes. He dipped his head, making her heart rate race into warp speed.
Nate’s jaw muscle clenched and unclenched. “Oh yeah, Seth wants it. He’s coming unglued. Yeah.”
Abby’s voice dropped to an octave she didn’t recognise as her own. “I am interested in both of you.”
Posted by Wendi Zwaduk and Megan Slayer at 11:46 AM