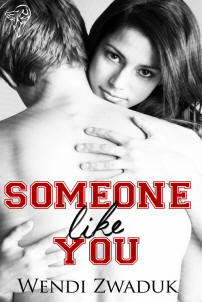 Mindy bit into her sub and suppressed another grin. Arran Mayes. Holy freaking crap. He’d made the first move. He’d talked to her. Singled her out. She squeezed her eyes shut. How’d she respond to him? Not like the vampish, come-hither ways she’d practised. Nope. She came across like just another girl. Nothing exciting. Plain.
Damn.
“Is the seat still open?”
Her heart fluttered and she opened her eyes. Good grief, she’d become goofy since he’d first spoken to her not five minutes prior. “All yours.”
“We should’ve struck up a conversation at the beginning of the semester. Would’ve been a lot more fun getting through Reinhold’s boring-as-sin lectures.” Arran plopped down next to her. “You’re easy to talk to.” He took a long swig from his bottle of soda. “So easy.”
Kiss of death. Almost as bad as ‘you have a lovely personality’. She sighed. Enough self-browbeating. “I don’t bite…much.”
Arran choked on his swallow of soda. He brushed the fizz from his lips and laughed. “I didn’t see that coming, but I love it.” He paused and stared at her.
Goosebumps rose on her skin. Good? Bad? She wasn’t sure.
“What are you doing Friday night?” His head down, Arran scrawled notes from her notebook. “If you’re not doing anything, there’s this party at my apartment building. Nothing exciting, but I’d… It’d be cool if you could come.”
A party. How long had it been since she’d been invited to a party? Too long. Arran wanted her there. The silly voice in the back of her head screamed caution. The whole thing could be a set-up.
I could love someone like you. She swallowed hard. Where had that come from? They barely knew each other’s names. Deep feelings for him shouldn’t have crossed her mind. She had opened her mouth to answer when another voice blotted her out.
“Mindy isn’t going to go to a party of yours.” Phillip twirled the seat next to her around and sat down. “She’s not a party girl. She’s prim and cold as ice.”
Arran looked up, narrowed his eyes and shook his head. A tight smile formed on his lips. “Phillip.” He closed the notebook and gingerly handed it to Mindy. “Thanks, hon. Think about what I said.”
“You’re wasting your time, man.” Phillip snatched her sub from the Styrofoam plate and munched happily.
Arran shook his head again and ambled away.
Mindy slumped in her seat. Imagine, the man who stoked her fire being chased away by the bane of her existence.

Email ThisBlogThis!Share to TwitterShare to FacebookShare to Pinterest
Labels: Arran, Contemporary, Mindy, New Release, someone like you, Total E Bound