Book Blast ~ Elizabeth in the New World by Maggie Mooha

It's time for a book blast and today I'm featuring Elizabeth in the New World by Maggie Mooha. You'll want to stick around. During this tour, Maggie Mooha will be awarding $15 Boroughs Bucks to 2 randomly drawn winners via rafflecopter during the tour. How cool is that? Want more chances to win? Then follow the tour. You can do that here: https://goddessfishpromotions.blogspot.com/2019/02/book-blast-elizabeth-in-new-world-by.html

Elizabeth in the New World
by Maggie Mooha 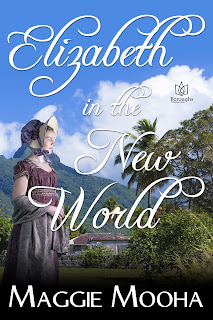 Jane Austen's most famous lovers, Darcy and Elizabeth, return in a tale of romance, adventure, and danger set in the heart of the Caribbean.

Darcy’s sudden, passionate kiss sweeps Elizabeth into a bliss she has never known...but their love is short-lived. On a field of honor, Wickham, once again, engages in an irresponsible act, which leaves Darcy mortally wounded and Elizabeth broken. Refusing to leave Darcy’s side, the last vestiges of her reputation are shattered, and when Elizabeth sees Darcy in his coffin, she is ruined in more ways than one. Devastated and without hope, reluctantly she agrees to accompany friends to Grenada, a Caribbean island on the brink of revolution.

Things are not what they seem. Darcy hasn’t died, but Elizabeth is gone and he fears it is too late to recapture what he has lost. As he struggles to recuperate, he must put aside his pride and his heritage in order to find the only woman he will ever love. Never before has Darcy sacrificed so much for a passion he fought against so vehemently. And never before has Elizabeth’s strength of character been stronger - it is the only thing standing between her and an end that doesn’t include Darcy.

She was grateful for all he was doing for her, and for her family despite its low connections and its unseemly behavior. Gratitude, however, was not her overwhelming emotion at that moment. She wanted him to take her in his arms. She wanted to kiss him good-bye, again and again. He turned to look at her once more.

She swallowed hard. His eyes. They bore into her like a dagger. It was now or never. What if he were killed? What if he lay in his grave never knowing that she loved him? He was prepared to sacrifice everything for her, his position, his reputation, his wealth, and now he was prepared to sacrifice his life. Could she hold her reputation above that?

He turned away from her and headed to the door. She could not let him go without telling him of her feelings. What if he was mistaken? What if Wickham killed her father and killed him too?
As he opened the door and exited, she said in a barely audible tone, “I love you.” She waited for the click of the door. It did not come.

The door opened again, and Darcy entered the room once more.

She faltered for a moment, then repeated, “I love you,” louder this time. It all happened in an instant. She did not move and yet she was in his arms. He strode across the room with such force that he lifted her off the ground. The touch of his body was intoxicating. Suddenly, a dark cloud crossed his face, and he let her down. He still had not kissed her.

“Perhaps you are only grateful to me,” he said, pulling away slightly, but not letting go of her. Oh no, no, he would know. She reached up and caressed his cheek.

She watched his face. His eyes searched hers as if he would find in them the truth he wanted to know. She touched his face again. He kissed her.

I’ve always been a storyteller. When I was little, I used to tell my sister stories before we went to 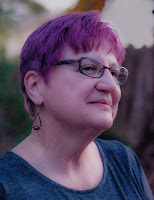 sleep. Most of them were serials – Superman and the like. It never occurred to me until much later in life that I should try my hand at writing.

Most of my career, I’ve been a music teacher. I’ve found music such a help when crafting a story. I actually see the structure of a book as if it was a musical composition. As for the nuts and bolts of my life, I grew up in the Chicago area and was a teacher there for quite a few years. I had a chance to teach at an international school in Dar Es Salaam in Tanzania, and I spent two years there. After adopting my son, we spent four years at an international school in the Philippines. During that time, I began writing. Now I live in the western U.S.

Most of my work has been screenplays. Over the years, I’ve won or placed well in competitions. I’m telling you this so you don’t think I sat down one day and wrote a novel out of the blue. I’ve spent many years working and learning.

A long time ago someone called me “an insatiable romantic.” I hope that's still true.

Thank you for hosting my book. I hope you enjoy it.