Drawn by Dragonblood by Lynn Burke ~ Out Now from Evernight Publishing 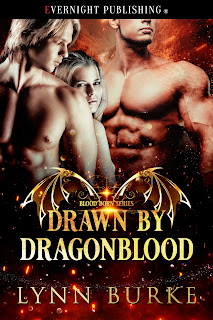 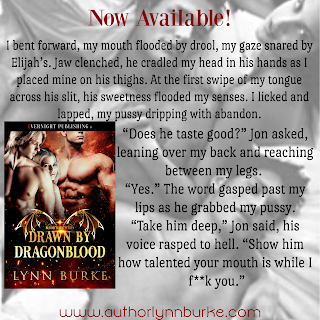 Elijah Tolzman has accepted he may be the only dragonblood shifter left on earth. Alone for close to ten years, he holds no hope of finding one, let alone the two fated mates needed to keep his kind from extinction.

When he catches the scent of his female deep in the White Mountains, he soars the skies, his heart and mind filled with hope as he goes to claim his destiny. However, he finds her in another man’s arms. His conscience might balk over tearing the lovers apart, but the dragon inside, the darkness he tries to suppress, demands he takes what belongs to him—regardless of the cost.

Jonathan Ebel and Dakota Taylor, long-time lovers who are unaware that the slightest hint of dragonblood simmers within their veins, are drawn to the pale-eyed stranger but are hesitant to acknowledge their inexplicable attraction to Elijah.

Can Jon admit his desire and open himself to submit to another man? Can Dakota accept the inevitable, knowing she may hurt the man she’s loved most of her life? Will Elijah finally get his heart’s wish?

Three dragonbloods are required to create life, but the destined mates must find the courage to make themselves vulnerable to each other, or their legacy, their species, dies with them.

A lazy trail of smoke snaked into the sky, pulling my focus a couple miles northeast of my veranda I stood upon. The setting sun caressed my left cheek as I blinked, bringing into focus the smoke’s origin. Two people sat beside the small fire, but from the distance, I couldn’t tell their sexes.

The breeze shifted the trees around me, their rustling leaves hiding my cliff-side home from view. I breathed deeply, hoping…

A blast of cooling air hit my face, and my heart stumbled. Her. My blonde goddess.

She wasn’t a dragonblood shifter, but hints of the ancient blood ran in her veins, calling to me.

I wanted to shift, shredding my jeans and long-sleeve t-shirt, and roar my savage declaration, but refrained for fear of scaring my precious gem away.

I strode into my house, grabbed a pullover sweatshirt, a small pack, and some water. One of the two hikers was mine, and I would claim her by night’s end.

My strides ate up the land, the rock and moss beneath my feet as I hastened toward my destiny, my mind racing, thoughts filled with the woman I would soon see. The brisk breeze shifted against my back and hinted at the fall to come, but remained warm enough that being outdoors as the sun set wasn’t bothersome. Not that I would have been uncomfortable either way. The dragonblood pumping through my arteries couldn’t be cooled.

Less than an hour later, the wind still at my back, I approached another outcropping perhaps two hundred yards from where I had seen the campfire. I pulled up short as the flickering flames came into view.

Two blond, tousled heads peeked from beneath a double sleeping bag beside the ring-less firepit—two writhing bodies in the throes of passion if their movements and moans my sharp ears made out in the still evening didn’t lie.

I clenched my teeth, hands fisted at my sides, fighting off the need to shift and take what the male had no right to touch.

But she loved another.

I fought back my dragon jealousy and gave into the sudden weakness in my legs, sitting on a rock hidden by the growing darkness. Their murmurs reached my ears; however, their words remained indistinct as I fought to accept what I had stumbled upon, what fate had so cruelly dangled in front of me only to snatch away.

The male tossed back the top of their sleeping bag, and the images I’d seen through their combined scent I had tasted on the breeze came into view. Not just her with her blonde hair, large breasts, and lush curves, but his muscular, taller form topped by a mess of similar blond, longer hair, the top portion of which he had pulled back into a short ponytail.

A frown flitted over my brow, but dissipated as my treasure stood, drawing my attention once more. My mouth dried as she tugged on her clothes, hiding her perfect body from me, their joyous laughter reaching across the distance. She smiled at him, the adoration in her hazel-green gaze like a knife to my heart. He caressed her cheek, her hair, his touch gentle on the one I wanted to pamper.

She already belonged to him.

I wanted to race to her, claim my female, but would she want me? Would the bonding energy between mates I had only read about draw her to me, steal her from her male? Mostly human, would she even recognize the connection between us?

The fear of rejection, of being abandoned again sent a knife-like stab through my chest. I had barely survived my love leaving me ten years earlier—nearly burned my home in the mountains to mere ash. How much more pain would being denied my true mate inflict?

Torn, I sat still as the stone beneath me, unmoving and watching as the two lovers prepared a late dinner, their movements in sync as though they had spent centuries together rather than the twenty-something years they appeared to be. I listened to their murmurs, their shared laughter. I studied them as the man banked the fire, and they both crawled back inside their sleeping bag.

I swallowed back my pain and jealousy as they curled together, two warm bodies intertwined, sharing space as only lovers can do.

The long night passed, but I couldn’t bear to leave her. Every cell in my body longed for my mate, and had I been a younger, immature dragon, I would have claimed her without a care for her feelings or her lover’s.

But, how could I inflict on the human male the same pain I had lived with for close to ten years? The heartache, the loneliness of losing the one you love? I hadn’t been given a choice—my love had left without an explanation.

I refused to inflict that on another, but by the time the sun rose, my tortured soul needed something. I needed resolution.

I would give her the chance to choose the mate she should be with or the one she had already attached herself to. It would be her choice—the male’s broken heart her doing, not mine.

My pulse raced and palms grew damp as I drew closer, the delicious aroma of ancient blood in the air flooding my mouth with saliva. I could taste her on my tongue from a hundred yards away. What would it be like once I closed the distance between us? Once I touched her skin? Would the energy crackle the distance between us or pull like a magnet enough to sway my mate into my arms?

Through all my years I never believe in any god, any higher being, but at that moment, I wished for nothing more than to trust in something bigger, something more than mere chance that my mostly-human mate would accept me. Want me.

The closer I drew, the less I cared about the male’s heartache should she choose the one she’d been destined for.

Shouldering a small pack I’d brought along to make it appear I, too, hiked the mountain trail, I moved into sight of the camp, every part of me, my dragon included, determined to have what belonged to me.

The male squatted beside the fire, putting a small pot over the coals.

“Hello,” I called out, not wanting to frighten him.

His blond head jerked up, and as he slowly stood, his blue-eyed gaze meeting mine, the energy I had hoped to share with my female expanded in waves across the short distance and wrapped around me in a connection stronger than I’d ever felt in my life.

I stumbled to a stop as my heart skipped a beat.

My mates. Both of them.

I fought to breathe, to accept what fate had given me. Two of the ancient blood. One male, one female, a bonded pair in need of their third—the necessary trio to create another dragon life. 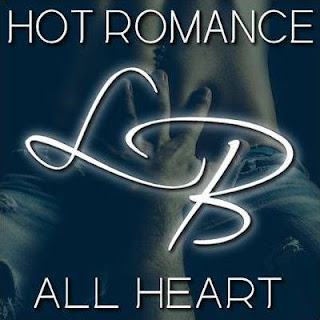 Posted by Wendi Zwaduk and Megan Slayer at 1:00 AM

Thanks so much for hosting me today! xoxo