This post is part of a virtual book tour organized by Goddess Fish Promotions. Michelle Hanson will be awarding a $20 Amazon or B/N GC to a randomly drawn winner via rafflecopter during the tour. Click on the tour banner to see the other stops on the tour. 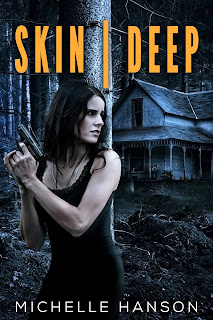 Now, as the one-year anniversary of the Collins case nears, four more women have been brutally murdered—and the killer is sending video footage of their deaths directly to Lena’s inbox.

The investigation brings Lena face-to-face with her past: the Collins case, her celebrity status, her lingering PTSD—and the first woman she ever loved, Special Agent Cait Porter, who’s just been assigned to the case.

The killer gives Lena five days to figure out who he is. But the closer she gets to finding him, the more likely it is that she’ll become his fifth victim.

I slipped my hand into hers, and the warmth of her fingers absorbed into my skin. She was dressed in a black suit with a BCI pin fasted to the collar of her white blouse. Next to the pin, a visitors’ badge adorned the lapel of her tailored blazer, which fit snugly around her flat stomach and formed neatly against her small breasts. Her pant legs brushed together as she uncrossed her legs and stood from the chair. We were nearly eye-level, each of us five-foot-seven, and we locked eyes again.

A sudden burst of skipped heartbeats fluttered from my chest as she squeezed my hand in hers. I was already warm from the sun soaking into my back via Flu’s large window, but a surge of unceasing warmth rushed from my head down to my toes. I lightly bit down on my lower lip, a smile broke through, and I let go of her hand. Cait clasped her hands together and took her seat. I bowed my head and slipped past her to the vacant chair. For a few seconds, I had forgotten Flu was even in the room.

About the Author: MICHELLE HANSON is a writer, director, producer, and photographer. She writes detective novels so her degree in Criminology can be put to good use. Michelle is an avid fan of the horror genre, and spends most of her free time volunteering at a local theatre. Her photography has been published in newspapers and online magazines/blogs.

Michelle is the creator, director and writer of the supernatural lesbian web series, Red Rue. She also wrote and directed Gül Girl, and the upcoming psychological thriller, Veho (Fearopoly Films).

Michelle is married, and has two dogs and three cats. She hopes to see her novels turn into a movie or television show one day (Netflix, are you listening?).