This post is part of a virtual book tour organized by Goddess Fish Promotions. The author will be giving away a $25 Amazon/BN GC. Click on the tour banner to see the rest of the stops on the tour. 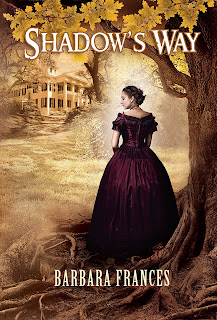 Prepare to be spellbound. Barbara Frances' long-awaited third novel, Shadow's Way, takes you to the coastal, deep South, where the past and the present mingle in a gothic tale of insanity, murder, and sexual intrigue.

You'll meet the beautiful Elaine Chauvier, former actress and proprietor of Shadow's Way, her family's antebellum home; the esteemed Archbishop Andre Figurant and his fallen identical twin, Bastien; newly arrived Ophelia and Rudy, here to explore their Chauvier roots and their ties to Shadow's Way; and the mysterious Madame Claudine. Under a veneer of piety and graciousness, i.e., the questions: What is good? What is evil? What is reality?

Her timing was perfect. As she rounded the corner, daily Mass had ended, and the Archbishop was standing outside the ornately carved doors of St. Paul’s Cathedral.

His followers were tiered below him on the steps. He turned and allowed his eyes to trace the contours of her body and she felt the thrill of power. A sheer white muslin shift clung to her black swim suit, still wet from morning exercise at the community pool. Despite the heat and the humidity from the Gulf of Mexico, she strolled by as if it were a cool spring day in Vermont.

Elaine Chauvier was a stately woman, aware of her long legs and enticing figure. Some said she was a snob and she would have agreed with them. After all, she was from aristocracy. Her great grandfather and General Robert E. Lee had been close friends, and her family had owned sections of plantation land and nearly a hundred slaves. No one could give this woman a passing glance without being momentarily transfixed. Soft black hair, always a bit ruffled to give a false impression of casualness, framed a face of classic perfection. Piercing dark eyes conveyed the superiority she felt over everyone.

Archbishop Andre Figurant gave hardly a thought to the man who knelt to kiss his ring or the mother holding up her baby for a blessing. His focus was across the street, beyond the wrought-iron fence surrounding the Cathedral’s property. The gliding presence hypnotized as well as beguiled him. 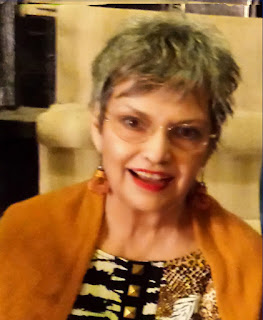 Barbara Frances has plenty of stories and a life spent acquiring them. Growing up Catholic on a small Texas farm, her childhood ambition was to become a nun. In ninth grade she entered a boarding school in Our Lady of the Lake Convent as an aspirant, the first of several steps before taking vows. On graduation, however, she passed up the nun’s habit for a college degree in English and Theatre Arts. Her professors were aghast when she declined a PhD program in order to become a stewardess, but Barbara never looked back. “In the Sixties, a stewardess was a glamorous occupation.” Her career highlights include dating a very gentlemanly Chuck Berry and “opening the bar” for a planeload of underage privates on their way to Vietnam.

Marriage, children, school teaching and divorce distracted her from storytelling, but one summer she and a friend coauthored a screenplay. “I never had such fun! I come from a family of storytellers. Relatives would come over and after dinner everyone would tell tales. Sometimes they were even true.” The next summer Barbara wrote a screenplay solo. Contest recognition, an agent and three optioned scripts followed but, weary of fickle producers and endless rewrites, she turned to novels. Shadow’s Way is her third book. Her first, Lottie’s Adventure, is aimed at young readers. Her second, Like I Used To Dance, is a family saga set in 1950’s rural Texas. Barbara’s fans can be thankful she passed up convent life for one of stories and storytelling. She and her husband Bill live in Austin, Texas.

Barbara welcomes questions or comments about Shadow’s Way at barb@barbarafrances.com.

Buy the book at https://www.amazon.com/Shadows-Way-Barbara-Frances-ebook/dp/B07FZ895H1/ref=sr_1_1

Thanks for hosting Shadow's Way.