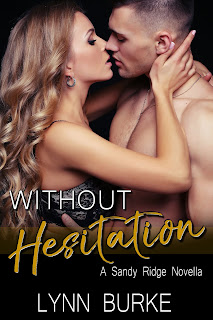 
Keywords: Contemporary, Romance, Series, HEA, Novella
Dumped like a bag of misshapen clay four months before her wedding, grade-school art teacher Mindy Hughson has no intention of opening her heart to anyone ever again. Hookups and one-night-stands fill the ache of abandonment—but still leave her wanting.
Attempting to find peace from the shattered pieces of her past, Mindy returns to Sandy Ridge where she's drawn to the cabin’s owner, Gage Hart. A carefree fling with a ripped hunk of fuck-a-licious beefsteak is just what she needs to fill the emptiness she feels inside. But Gage's sexy smirk, lone dimple, and deep stare demand more than just the press of her body against his. He wants her love. With his mere presence threatening her resolve to keep things simple, will the pain of her past force her to flee? Or will Mindy dare to open her heart to Gage without hesitation?


Amazon: amzn.to/2OSR7K7
Amazon UK: amzn.to/2A37PhA
Smashwords: bit.ly/2QCOaum
Barnes & Noble: bit.ly/2ycJapq
Kobo: https://bit.ly/2Ca7QSu
iTunes: https://apple.co/2NAhvnp
ADULT EXCERPT:
Mindy lifted her legs and wrapped them around his waist, uncaring of the fact her dress rode up, and they stood in a public parking lot. Enough shadow hid her from view, she expected, and if not, she hoped whoever glanced at them enjoyed the show.
The hard ridge of Gage’s cock pressed against her, and the slow gyrating of his hips and thrusting tongue brought a gasp to her lips.
“Keep that hip action up,” she said as he kissed along her jaw, “and I’m going to come.”
“Hot and bothered, huh?” he whispered in her ear, his hot breath sending tingles along her spine.
“I want you.”
“I can’t keep my mind off of you, Mindy. Goddamnit.” Gage returned his lips to hers and slid a hand between them. He groaned as his fingertips rubbed along the wet silk separating their skin. “You’re fucking soaked.”
She wiggled against his hand with a moan. “I’m soaked because of you. I’ve never wanted a man like this before.”
“You’re like a drug…”
“This craving is driving me insane…”
He stared down into her eyes as his finger toyed with the edge of her panties against the inside of her thigh
“Touch me, Gage.”
He shut his eyes. Swallowed. With a groan, he slid his fingers beneath the edge of her panties and stroked up through her wetness. “I want you to come on my hand,” he whispered and leaned down, brushing his lips over hers. “I want your cum dripping off my fingers.”
She moaned and tipped her head back against the window as he slid his finger deep inside of her throbbing pussy. His thumb brushed over her clit, and she gasped, her body bucking against him.
Gage pressed in with a second finger and rubbed across her hard nub. “Come for me, baby.” He captured her lips, and Mindy’s climax ripped through her, his mouth muting her cries.
Her pussy clamped down on this thrusting fingers, trying to pull him deeper.
Not enough…
She whimpered while thrusting to meet him. “Need you,” she gasped, pulling her mouth away from him.
“Fuck.” Gage growled and bit her collarbone while flicking over her clit again.
“Oh, God!” A second climax rippled over Mindy, and she sucked in her lower lip to keep her groans contained.
Gage lifted his hand and licked his fingers clean as she panted for breath, her legs still wrapped tight around him. “You’re the sweetest thing I’ve ever tasted.”
Another rush of arousal swept over Mindy. “I want your cock inside of me, Gage.”
“Goddamn, the way you talk.”
They peered at each other in the darkness, and an ache Mindy recognized clenched her chest. Fucking only, she reminded herself, pushing the feeling away and lowering her wobbly legs.
“Let’s get back to the cabin before I beg to ride you right here in this truck.”
Gage groaned again and stepped back, adjusting himself through his jeans. “Don’t know if I can wait that long.”
“Get in the truck.”
A smirk brought out his dimple, and he pulled open her door, grabbed her purse, and ushered her up into the cab. He slammed the door and rounded the truck, and the second he climbed in, Mindy got onto her knees and reached over the console, her fingers fumbling with his jeans.
Gage slid the driver seat back all the way and took over, his steady hands making short work of unbuttoning his jeans and jerking them down off his hips. He slid his hand down his length, and Mindy bit down on her lip while grabbing a condom from her purse.
She climbed over the console, settling her knees on either side of his hips, and he reached for the condom. “Let me,” she whispered, wiping her thumb over the bead of pre-cum at his tip.
Gage tipped his head back against the headrest, grasping his base and holding his cock out toward her.
She stuck her thumb in her mouth, sucking the salty taste off with a small moan. “If there was more room in this truck…”
“Fuck,” he groaned in response, another bead rising to replace the one she’d tasted. “Hurry up before I blow my fucking load all over this pretty dress of yours.”
With a small laugh, Mindy rolled the condom down over his length and shifted closer.
“You still have your damn panties on,” he said with a growl while grasping her hips.
Mindy reached between them and slid them to the side to rub her wet folds along his straining cock. “Nothing better than a panties-to-the-side quickie in the front seat of a truck,” she said and lifted her hips up.
© Lynn Burke 2018

Thanks so much for hosting me!! xoxo