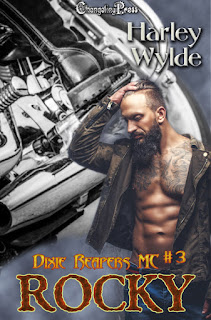 Mara: I was daddy's little girl, until he didn't come home one day. Mom moved on, married a rich guy I can't stand, and his son, Sebastian Rossi, wants what he can't have -- me. I didn't realize when I chose to run that I would crash down a mountain, or that the man who pulled me from the wreckage would rescue me in every way that counts. Rocky is the biggest, sexiest badass I've ever seen. And the more time I spend with him, the more I want to feel his lips on mine, his hands holding me, his body claiming me. I want him so bad I can taste it, but the stubborn man says I'm too young. I'll just have to prove him wrong.

Rocky: All I wanted was to brood in peace and quiet on my mountaintop while I tried to outrun my demons. I never expected that past to show up in the form of a sexy as fuck woman -- a woman I shouldn't touch. I'm not only twenty years older than her, I'm part of the reason her dad never came home. I'll do anything it takes to keep her safe, even go home to Alabama. My brothers, the Dixie Reapers, will help protect her. I'm just not sure who's going to protect her from me, because if I ever get my hands on all those curves, I'm not ever going to let her go.

Pre-Order for April 13th at: 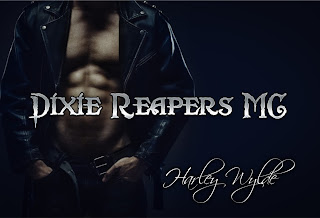 “Coffee,” he said, although it came out more like a grunt.

I accepted the cup, the warmth of it seeping into my chilled fingers, and took a sip. Despite the bitter taste, I didn’t wince. I’d always been more of a caramel skinny latte kind of girl, but the hot coffee slid down my throat and began to warm me from the inside out. Rocky watched me a few minutes before walking off again, his boots thudding against the wood floors.

When the coffee was gone, I set the cup aside and tried to push myself to my feet. I groaned, and the room spun as I staggered upright. As everything began to tilt and I felt myself falling back to the floor, strong arms wrapped around me, drawing my body tight against my rescuer. Rocky’s hands splayed across my back, and I couldn’t remember ever feeling so delicate. I was small in stature at just a hair over five feet, but I had more curves than most. Men had called me chunky most of my life. But with Rocky, I felt… feminine. Womanly. I felt…

The warmth that began to spread through me made me gasp and jerk my gaze to his face. Something hard and thick pressed against my belly. I might not be experienced, but even I couldn’t deny that Rocky seemed attracted to me. Or maybe he hadn’t had a woman in so long that just anyone would do. I saw his eyes flare a moment before he lifted me into his arms and began striding for the stairs.

I clung to him, not knowing where we were going, but suspecting it was his bedroom. I should tell him to return me to the fire, tell him I didn’t want this.

But you do, a voice whispered in my ear.

And I did. I’ve never found a man attractive before, not like this. But with Rocky’s arms holding me, I wanted to know what it would feel like to be pressed against him, skin to skin. I wanted to feel him slide inside me, claim me, and make me his. I wanted to feel that beard rub against my skin. I wanted… him. I briefly wondered what kind of woman that made me since I’d crashed down a damn mountain and now wanted to have sex with my hunky rescuer. Maybe I’d suffered head trauma.

The stairs ended at a large room with no door. The bed against the wall looked far bigger than a regular king-size, the covers rumpled. Rocky carried me across the room and eased me down onto the soft mattress, then pulled the covers up to my chin. He paused a moment before turning to the fireplace across the room. Wood was stacked nearby, and he began building a fire. Watching his muscular back and shoulders move was starting another kind of fire too. One I had never felt before. I pressed my thighs together to ease the ache.

When the blaze was glowing brightly, Rocky rose to his feet and studied me. There was heat in his gaze, and I wondered if I was finally going to find out what it was like to have a man claim me. I’d held onto my virginity for so long, never had been tempted to lose it. Until now.

“Dinner will be ready in an hour. You should rest,” he said gruffly before turning and leaving me alone.

My jaw dropped at his retreating back, and when I heard the last of his steps carrying him down the stairs, I slumped against his pillows and drew in a deep breath. My eyes closed as his scent surrounded me. Something woodsy and full of spice. Curling onto my side, I buried my face in his pillow and just breathed him in. Whoever the strange man was who had pulled me from the car, it was obvious he wasn’t going to take advantage. And for some reason, that disappointed me.

“Stupid woman,” I muttered. I felt the tingle between my legs and moaned. “And stupid hormones.”

Check them out here!

Harley’s other half would probably say those words describe her, but they also describe her books. When Harley is writing, her motto is the hotter the better. Off the charts sex, commanding men, and the women who can’t deny them. If you want men who talk dirty, are sexy as hell, and take what they want, then you’ve come to the right place.

Thanks so much for having me on your blog today! :) I'm very excited about this book. The Dixie Reapers have been so much fun to write, and I can't wait to dig further into the series.