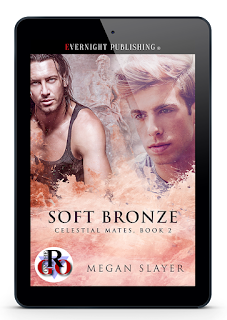 Zelus, the god of jealousy, has been imprisoned in solid bronze for the last two millennia. A simple kiss can break the spell and free him from the metal—if his lover is willing to believe.

Camden Crowe isn’t a specialist in ancient artifacts, but he does know how to guard them. He spends his days working as a security guard in charge of keeping the bronze statue of Zelus safe. He can’t contain his attraction to the nude god. What will happen when the security geek finds out he’s stronger than he ever believed and can harness the power of the gods?

Zelus placed his hands on the lid of the box. They couldn’t cover him. They couldn’t sell him. He was real. His heart hammered. This bastard couldn’t steal him or make money from him. No way.

Finally, he had his heart back. If he screamed, they’d know the curse had been broken, or at least they’d have him sent away from his guard. He’d have to bide his time and wait until someone opened the lid. He wasn’t sticking around for Gus to use him. Even if it took magic or begging his father, he’d get out of Gus’s clutches, then he’d find Camden.

He couldn’t believe his luck. He had finally found the person to break the curse, but now he was stuck in a crate, headed for a store’s window display.

What a time to not have his powers!

He’d wait. There wasn’t much else he could do. Zelus closed his eyes. Camden broke the spell once. With another kiss and a declaration of love, he could destroy the curse forever.

All Zelus had to do was hold on.
Posted by Wendi Zwaduk and Megan Slayer at 12:00 AM