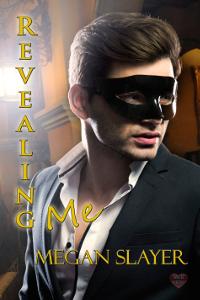 Can a one-night stand lead to the love of a lifetime?

Kenley Kissinger knew from the moment he met Peter, he’d never be the same. The white hot memories of their fling imprinted themselves on his mind. He can’t get over the handsome blond man. But since their night together, he hasn’t heard from Peter. Do they have a future or should he quit while he’s ahead?

Peter Barnes hasn’t forgotten Kenley, but he’s got a few secrets he’s not ready to spill. With the help of a masquerade ball thrown for the neighborhood and one nosy neighbor, he’s out to get his man. Once the masks are off, he’s ready to bare his soul. Will Peter be able to convince Kenley to give him a second try or is this pairing destined to be just a fling?

Available at:
MLR Books
Amazon
Check out an excerpt on my website: http://www.wendizwaduk.com/revealingme.htm

Kenley Kissinger loved balls, but not this kind of ball. Fantasy gatherings with elaborate masks and groups of people together having fun-not awful, but not great for a guy who preferred to keep to himself.

He adjusted the mask over his eyes. He hated masks. Truth be told, he hated to have his face covered. He preferred honesty, but this damn ball wasn't about honesty. It was a celebration, and no one gave a rat's ass about his feelings.

He stepped into the Annex building and sucked in a long breath. His neighbor, Nadine, had rallied the neighborhood and conned everyone into holding a masquerade ball to celebrate the end of the summer. The kids were back in school and the floods that had ravaged the neighborhood over the summer were finally gone. The water levels for the Jeromesville Creek had reached record heights. But then the whole summer had been full of crazy weather and most people in Jeromesville, Ohio weren't used to so much rain.

He turned his attention back to the dancers out on the street. He didn't see how a party would make much difference, and boost morale after flooding, but whatever. He played along.

Maybe Peter would be there.

His breath clogged in his throat. He'd had a one-night stand with Peter two months ago, even called his cell phone a couple times afterwards, but Peter was always too busy to get together again.

In the course of one night, he'd fallen into lust with Peter Barnes. He had to be crazy. Peter wasn't interested, but he kept thinking about the blond guy down the street. Why did Peter seem so sad? Why wasn't he interested in getting together again? Why couldn't Peter give him some sort of closure?

He and Peter hadn't said anything about not wanting to share personal information. They seemed to be rather tight during the evening they'd shared, but then in the morning Peter disappeared. He wasn't even sure what Peter did for a living.

He turned his attention back to the makeshift dance floor in the street. The DJ played 80's dance music requiring everyone in the crowd to do the same steps. He'd never been good at those kinds of dances. His coordination didn't work that way. He usually tripped over the person next to him or ended up five steps late on each move.

Leaning against the brick mailbox structure, he watched the dancers. A man with blond hair and a tailored suit danced along to the music. The black masquerade mask covered his eyes and forehead, but the rest of his face was up for viewing. When he smiled, a dimple deepened on his right cheek. Did he have scruff? Too hard to tell from so far away. He admired the build of the man's body, strong like a bodybuilder, but wider in the shoulders and narrow around the waist with long legs. He sighed and bit back a grin. He liked men with long legs.

Peter had long legs and a dimple. He shivered. The memory of Peter's kiss lingered in Kenley's mind. He wanted to feel that desire again, and wanted to be loved.


Posted by Wendi Zwaduk and Megan Slayer at 6:57 AM