It's a blurb blitz for Nowhere to Hide by Louise Lyndon. You'll want to stick around and keep reading. There are prizes to be won. Like? Louise will be awarding a $15 Amazon or B/N GC to a randomly drawn winner via rafflecopter during the tour. How cool is that? Want more chances to win? Then follow the tour. You can do that here: http://goddessfishpromotions.blogspot.com/2017/03/blurb-blitz-nowhere-to-hide-by-louise.html

Nowhere to Hide
by Louise Lyndon 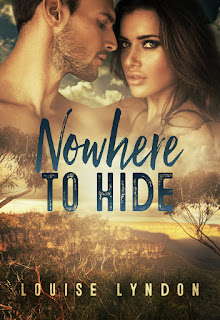 Forty years ago the Australian rural town of Burrawang Bend was the scene of a brutal murder, and the townspeople are still calling for justice. Marlee Moore, the suspect’s and victim’s granddaughter, is fighting to clear her grandfather’s name. And no one is going to stand in her way. But when things take a dangerous and deadly turn, Marlee must turn to the one man she was determined to run out of town.

Devon Reilly, investigative journalist for his hit TV show, Justice Served, is in Burrawang Bend to solve the forty-year-old cold case murder. But, he didn't bargain on Marlee keeping him from investigating the case and he soon questions where her loyalties lie. With the living? Or with the dead? But when Marlee and her son’s life are put in danger, Devon knows he is the only man who can keep them alive. But what happens when he soon realizes he is the bigger threat to the woman and kid he loves?

Marlee shifted on her seat. She tapped her fingers against the table, but she would not look at him. Was Marlee finally beginning to see the holes in Saul’s story?

“I have a copy of the signed statement in which Saul goes into great detail about Marion having terminal cancer. I can show it to you if you like.”

“I need to get Max home.” But she made no move to leave. Instead, she rubbed her hands along her thighs and sank her teeth into her lower lip. Her foot started to tap beneath the table. “There’s been a lot to take in. I need to process what I’ve learned tonight.”

She dragged herself to her feet. As she crossed to his bed, her steps were short and jerky. She turned to face him. He wanted to tell her not to go. Instead, he pressed his lips together.

“If I have questions, can I call you?”

Devon nodded. He retrieved his wallet and withdrew his card. She took it immediately.

Saul Moore had seemingly kept his head down and had stayed out of trouble for forty years. There’d been no reported unexplained deaths in or around Burrawang Bend. But Devon was in town to poke the bear. And an angry bear was a dangerous one.

“Marlee, I can’t tell you what to do, but I can ask you to be careful. Think twice if you’re going to confront him with what you’ve learnedtonight.”

Devon stood at the door and watched Marlee and Max drive into the darkness. What was she heading to? Was she going to confront Saul with what she had learned?

He reached for his mobile and dialed Annie. She answered on the second ring. “Get a pair of eyeballs on Marlee Moore.”

“I think she may have just realized her grandfather is a murderer.”

Louise grew up in rural Victoria, Australia, before moving to England, where for sixteen years she soaked up the vibrancy of London and the medieval history of England. She has since returned to Australia and now lives in Melbourne.
In 2013, Louise won first prize in the historical romance category of the Crested Butte Sandy Writing Contest for her story, The Promise, which has since been retitled and is now known as, Of Love & Vengeance. Her second novel, Of Love & Betrayal is available now.
When not writing, Louise can be found covered in mud, crawling under barbed wire and hoisting herself over twelve foot walls! She is also a self confessed nail polish addict and you can check out her nail art designs on her Instagram account.

Thank you so much for having me as your guest. It's great to be here.

Great excerpt, thanks for sharing!

Congrats on the new book and good luck on the book tour!

Thanks for stopping by.

Thanks for stopping by.

Thanks for stopping by and good luck!