It's a blurb blitz and today I'm featuring two books! Yeah. Danced Close by Annabeth Albert and Intoxicating by Heather Heyford. You'll want to keep reading. Why? There are prizes to be won? Like? The authors will be awarding digital copies of the books on tour to a randomly drawn winner via rafflecopter during the tour. Very cool. Want more chances to win? Then follow the tour. You can do that here: http://goddessfishpromotions.blogspot.com/2017/04/blurb-blitz-lyrical-press-contemporary.html 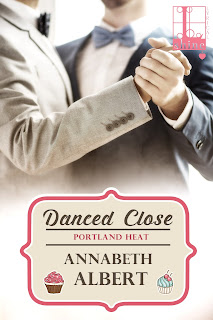 Portland, Oregon, is one of the hottest cities in America. Just ask all the hard-working men sweating it up behind the counters of the restaurants, boutiques, and cafés all over town . . .
Newly clean and sober, Todd’s taken a shine to his job at Portland’s most talked about bakery. It’s not just the delicious desserts they sell, but the tasty treats who keep walking through the door. That certainly includes Kendall Rose, a wedding planner with eyes the color of brown sugar and skin to match. Todd doesn’t try to hide his attraction to Kendall’s elegant confidence and unique style, even as he worries about exposing the secrets of his past.

For Kendall, the attention is just part of the anything-goes Portland he’s grown to love. But he’s still looking for that special someone who will embrace all of him—including his gender fluidity. So he takes a chance and asks Todd to be his partner in a dance class leading to a fundraiser. When the music starts and he takes Todd in his arms, Kendall is shocked at how good it feels. Turns out taking the lead for once isn’t a mistake. In fact, it might be time to take the next step and follow his heart . . 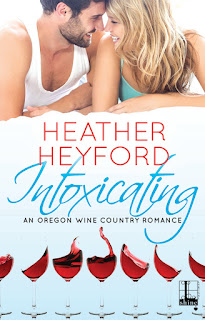 In the second book of Heather Heyford’s series, set in Oregon’s wine country, having a crush takes on a whole new meaning when a lady sommelier teams up with the hottie from her high school days . . .

The Girl Most Likely

. . . to be a waitress at her hometown café. That’s what Clarkston’s high school yearbook said about Poppy Springer ten years ago and that’s where the beauty queen is today. But that’s about to change now that Poppy has been offered a position as a lady sommelier at a cutting-edge new restaurant. Only Poppy has an embarrassing secret that could keep her from landing her dream job. A secret her high school crush seems determined to help her with . . .

The Man Most Wanted

In high school, Heath Sinclair may have been voted most likely to blow something up, but these days the sexy science prodigy is a self-made success story with his popular microbrewery and chiseled good looks. So why is Clarkston’s most-eligible man so hell-bent on helping Poppy prove that she is more than her reputation? Could it be the enigmatic bachelor has a hankering for the girl who got away?

Now for an Excerpt from Intoxicating

He caught a glimpse of skin, a flash of navel inside his jacket.

And that’s when his earlier objective to methodically analyze her flew out the window. This wasn’t the little girl he once knew. This Poppy was every inch a woman. When had that happened? How had he been so blind, and for how long?

And then her weight landed on her heel and her knee buckled. In the blink of an eye her jubilant expression turned tortured, and she inhaled sharply.

Before he knew what he was doing he was there, his arm snaking around her waist, propping her up. “Over here.” He guided her to- ward the nearest couch, letting her use his body as a crutch.
“If I hadn’t second-guessed myself, I would have gotten all six of those wines right!” said Poppy. Not even her pain could erase her elation for long. For Poppy, every victory, even a small one, was cause for celebration.

But for Heath, that test was rapidly becoming a memory.

The main thing is her foot and easing her discomfort, insisted his ever-practical nature.

He tried to maintain decorum as he deposited her rump onto a couch covered in a crimson plush and, mission accomplished, began to straighten his spine.

But Poppy apparently had a different idea. Still caught up in her enthusiasm, she seemed to be in no hurry to unclamp her grip from around his neck.

With a growing uncertainty, Heath searched her face and saw that now her expression had softened. Her eyes sparkled with a new ardor that both disturbed and exhilarated him. A waterfall of gold cascaded behind her as her head fell back, exposing her vulnerable neck, her eyes narrowed, and her lips parted in invitation. 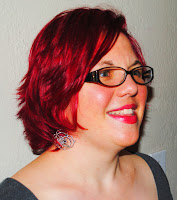 Annabeth Albert grew up sneaking romance novels under the bed covers. Now, she devours all subgenres of romance out in the open—no flashlights required! When she’s not adding to her keeper shelf, she’s a multi-published Pacific Northwest romance writer. Emotionally complex, sexy, and funny stories are her favorites both to read and to write. Annabeth loves finding happy endings for a variety of pairings and is a passionate gay rights supporter. In between searching out dark heroes to redeem, she works a rewarding day job and wrangles two toddlers.

Heather Heyford is the author of contemporary romances set in the wine country. See what inspires her writing on her many Pinterest boards, read more about her on HeatherHeyford.com, and connect with her on Facebook and Instagram.


Enter to win both books - a Rafflecopter giveaway
Posted by Wendi Zwaduk and Megan Slayer at 1:00 AM