It's a book blast by Ally Adams, with her book Team Russian. Check it out!! There are prizes to be won. Like? Ally will be awarding a mobi or ePub copy of Team Russian to 5 randomly drawn winners via rafflecopter during the tour. Want more chances to win? Then follow the tour. You Can do that here: http://goddessfishpromotions.blogspot.com/2017/03/book-blast-team-russian-by-ally-adams.html 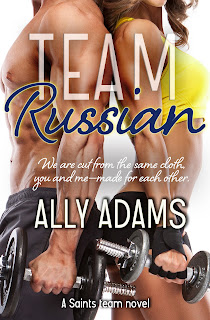 He’s tall, dark, handsome and athletic and just that little bit mysterious. Star of the Saint’s team, The Russian has had a high profile relationship with a Hollywood director’s daughter for years and now that it is over, he just wants to focus on his sporting career. Due to injury, Carla Brooker’s professional sporting career as a basketballer with the Suns is about to come to an end, but not before she needs a date for her team's gala ball night. When these two sporting hotshots meet, they are more than a good fit, they are made for each other … if they can just file away their history and find a way to be together.

The doors opened and a few of the flight attendants came out, along with a handful of passengers. Buzz was out first and greeted us. He wrapped an arm around Laura and gave me a wink as they left, as though all was forgiven for his prank. Some of the Saints’ crew followed, then the coach, and Lucas who gave Mia a wave and pointed in the direction of the journos. She nodded, knowing he had to give a quick interview first.

Tomás came into sight, greeted us all and left with Alice, and then Nik and The Russian appeared. The Russian’s eyes scanned the area and found mine, and he gave me a smile that would launch ships. He walked towards me, threw his bag over his shoulder and wrapped his spare arm around me, pressing me hard to him, our lips locked. It was so healing, his lips on mine, his skin against mine, just the feel of his strong body encompassing me, and he didn’t stop kissing me. I couldn’t believe it, in front of his teammates and everything!

“Geez, not in public you two, cut it out,” Lucas teased, coming over and giving Mia a showy kiss.

“Get a room, Russian,” Nik added as Sasha threw herself at him, and then we heard the sound of flashes and The Russian released me just a few inches, enough to draw a breath.

“Hello Russian,” I grinned up at him, admiring his dark eyes and beautiful face. He looked exhausted.

“We need to get home immediately,” The Russian said, slightly breathless. “Let’s go.”

He released me only enough so I could walk, tucking me into his body, ignoring the flashes of cameras. When we got to my car, he threw his bag in the back seat and sat back while I drove, annoying me by rubbing his hand over my leg, and anywhere else he could get access to before I hit him away for being distracting. We hardly spoke, we just wanted to be together, to be near each other.

The Russian hustled me straight into my bedroom, closing my bedroom door with his foot and knocking me onto the bed.  When we were settled, he stopped and placed his forehead on mine.

ALLY ADAMS is a journalist who lives in coastal Victoria, Australia with her husband and furry friends.

She is a literature major, avid romance reader and writer. Ally freelances for two lifestyle magazines and has just completed her fourth Saints Team novel. She is now looking towards a whole new series!

Connect with Ally at:

“Team Lucas should come with a warning: once you start you won’t be able to put this Saints team novel down until the very end,” Jaymy M

“It was hot, sexy and passionate. I wasn’t expecting to fall in love with this novel so much but I did and I love the author even more for doing just that!” Christine, Goodreads

“This is one of the best sports romances I ever read. I have re-read it now a couple of times and each time I fall in love with it a bit more.” Claudia, Goodreads

“So much fun to read. Really, the sometimes funny and witty dialogues between the leads were just amazing. I would have to quote half the book here just to try to give you my favorite examples.” Jeri T. Ryan

“This is a hot, steamy read filled with passion from beginning to end … a great read for readers who love hot guys and hot stories…and women who have a head on their shoulders.” Tonja Drecker

“Ms. Ally had me sold and hostage from the very first page. You need to read the story!” Darlene, Goodreads