It's time for the Hump Day Humps. I thought I'd use another snippet from Dual Threat. Can't get enough of those Tiger Shifters!

They want their mate. She wants love without pain. Together, they can be whole. 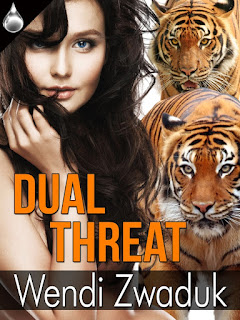 Kaia Martin dances to pay the bills. She doesn’t mind baring her body, but her heart? That’s another question. But what happens when two tiger shifters push her out of her comfort zone and into her heart’s desire?

Evan and Ian Davis have been in love with Kaia since the moment they met her. Their tigers know she’s the one for them. They’ve waited long enough for her to see what they’ve always known—she’s their mate. Can these twin tiger shifters prove love really can conquer all?


And now for that Hump!!

“Make love to me.” She stood up in the water like a shimmering goddess. Bubbles slid down her curves. He’d seen her so many times in the club, but she never looked as radiant as she did now.
“I’m glad you got the piercings done. Sexy.” Evan grabbed the closest towel and dried her off, taking liberal time on her breasts and pussy. He massaged her and touched her belly. He turned her around with her back to him. Kaia leaned back in his arms and groaned. She rested her head on his shoulder. His cock throbbed, and he nudged her ass. His tiger roared and pawed him from within.
Fighting his need to take her, Evan kissed the soft spot between her neck and shoulder. “We need to wait for Ian,” he murmured.
Kaia moved his hands to her breasts. He caressed her supple skin, pinching her nipples. He tugged the piercings, happy when she whimpered and ground her butt into his crotch.
He dragged his teeth over her shoulder. His tiger growled again, ready to mark her. Footsteps padded on the floor. When Evan glanced down the hallway, he noticed Ian leaning on the door frame. With one nod, Ian telegraphed their next move. Evan disengaged from Kaia and then scooped her into his arms. She clung to him, but didn’t fight him.
Evan carried her to the bedroom and placed her in the middle of Ian’s king-sized bed. Kaia blushed under their twin appraisals. She clasped Ian’s hand in her left hand and grabbed Evan’s right hand with hers. Her nipples pebbled, and she opened her legs. Her cunt glistened with her juices.
Evan leaned over her leg and breathed in her scent. Her spice imprinted itself on his mind. His tiger gnashed its teeth and snarled. Evan buried his nose in her curls and then traced his tongue over her cleft. Her salty taste exploded on his tongue.
Kaia released her grasp on him and shoved her fingers into his hair. She wrapped her leg around his shoulder and dug her heel into his back. When he glanced over at Ian, Ian palmed one of her breasts and flicked his tongue over the other. Evan grinned and then resumed tasting her. He speared one finger into her hot pussy. She gripped him tight from within. Her vagina rippled around his finger as he stroked her. Buzzing his lips, he vibrated her clit. He added another finger, stretching her.
“God, yeah.” Kaia planted her feet and rode his hand. “Evan.”
He winked at Ian, who sucked hard on her nipple. Ian moved from her chest to her mouth and kissed her lips. Seeing his brother loosening up with Kaia made Evan grin. His cock throbbed and his balls ached. His tiger clawed at him from within. He fought the craving to take her.
Kaia bucked her hips. “So close,” she panted.
“Make her come.” Ian dusted his fingers over her taut nipples. “Come for him, Kaia. Show us how beautiful you are when you come apart.”
Posted by Wendi Zwaduk and Megan Slayer at 12:00 AM

Did you consider exchanging with the ultimate Bitcoin exchange company - YoBit.